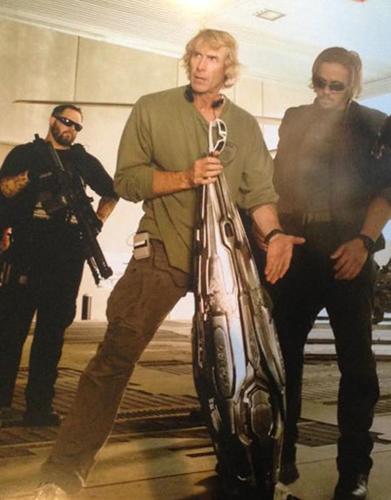 From left, Kevin Kent stands by on the set of  “Transformers: Age of Extinction” as director Michael Bay talks about equipment with Andy Arribito, also a Navy SEAL turned actor. The fourth installment in the Transformers franchise opens today. 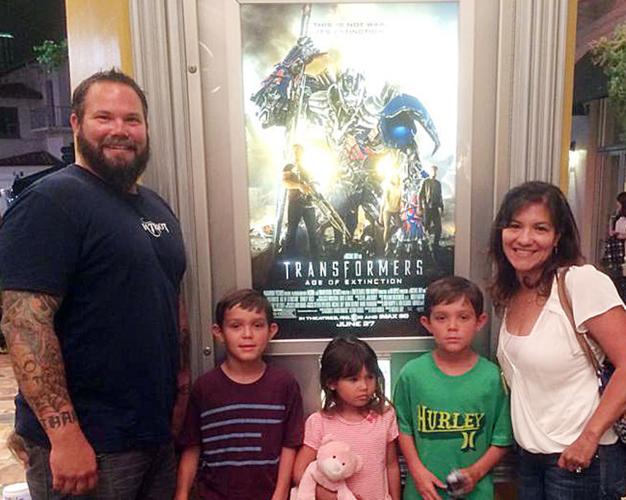 From left, former Henry Countian Kevin Kent, children Gavin, Kaila and Ethan and wife Gabriela, all of San Diego, stop at the “Transformers: Age of Extinction” signage before watching the movie Wednesday in which Kent has an acting role and voice-over work. 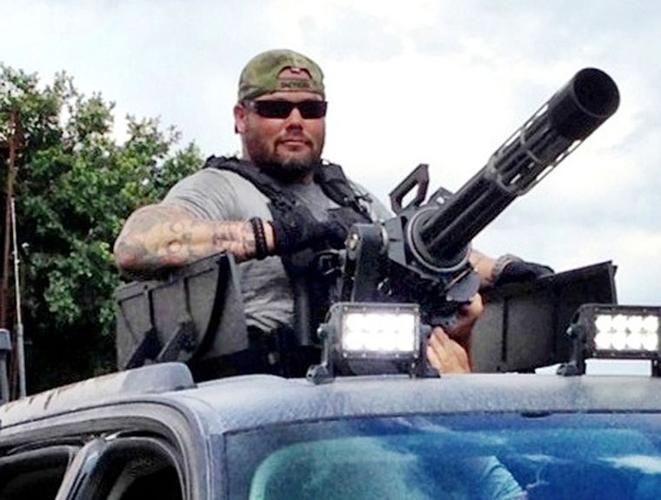 From left, Kevin Kent stands by on the set of  “Transformers: Age of Extinction” as director Michael Bay talks about equipment with Andy Arribito, also a Navy SEAL turned actor. The fourth installment in the Transformers franchise opens today.

From left, former Henry Countian Kevin Kent, children Gavin, Kaila and Ethan and wife Gabriela, all of San Diego, stop at the “Transformers: Age of Extinction” signage before watching the movie Wednesday in which Kent has an acting role and voice-over work.

There’s more to him than meets the eye.

Former Henry Countian Kevin Kent will help take on the Decepticons in “Transformers: Age of Extinction,” opening in 3-D at the Parisian Theater today.

The 1992 Henry County High School graduate retired in September 2013 from the U.S. Navy but has found a new career to keep him busy: acting.

During his 20-1/2 years of Navy service — of which 15 years was at SEAL Team Five, and four years at the Naval Special Warfare Center as a SEAL instructor — Kent was presented numerous awards including (in order of prominence):

• A Bronze Star Medal with V.

“After all the fighting for our freedom, our planet and our lives,” Kent is taking a break from “such heroic nonsense” to act, something he enjoys just as much.

He has had numerous parts throughout the years in other films, including “Act of Valor,” for which he also was a military/technical adviser, and “Red,” starring Bruce Willis, has done AT&T and Ruckpack commercials, and voice-over work on “Transformers 3” and the “NCIS” TV series.

In the fourth of the “Transformers” series, Kent not only does voice-over work, but also is a military/technical adviser and plays a Cemetery Wind team member.

“I play a Cemetery Wind team member, who along with a government agency, is trying to eradicate all of the Transformers off of Earth,” Kent said.

In the movie, an inventor and robotics engineer (played by Kent’s friend and actor Mark Wahlberg) and his daughter (Nicola Peltz) discover a deactivated Optimus Prime. But, a businessman and a group of scientists attempt to learn from and control the technology the Autobots and Decepticons are best known for. The film also will feature the Dinobots for the first time.

“The cast and crew were really down to earth, and I still maintain communications with a lot of them to this day,” Kent said.

“Although I didn’t train Mark Wahlberg, I trained Kelsey Grammer, Titus Welliver, and several stuntmen on weapons handling and tactics for TF4. I worked personal security for Mark Wahlberg and Michael Bay (director) in Hong Kong during filming of TF4,” Kent added.

Wahlberg also plays the lead role in “Lone Survivor” as Marcus Luttrell, a Navy SEAL whom Kent is close friends with, and attended the movie’s premier in Hollywood with him.

Again, Kent puts his military/technical advising to work for “The Last Ship,” a new series on TNT Drama which premiered Sunday with more than 7 million viewers. In “The Last Ship,” executive produced by Bay, a virus has taken over and the only hope for mankind is the crew of a naval destroyer.

What’s next? Kent also is filming as one of the fictional ninja Foot Clan in “Teenage Mutant Ninja Turtles.” The movie, directed by Jonathan Liebesman and starring Megan Fox, is slated to be released later this year.

From Navy SEAL to actor, Kent said he most enjoys being with his family.

“I’m just lucky enough to make it through nine combat deployments with the SEAL teams and still be in relatively one piece, especially with my relationship with my wife and kids still intact,” he said.

He is the son of Ed and Paulette Kent of Puryear. He and wife Gabriela and twin sons Ethan and Gavin and daughter Kaila live in San Diego. All the children are also in television, film, commercials and do modeling.