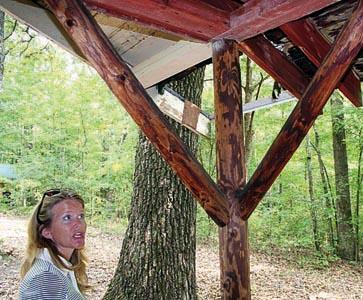 Gale shows the rotted planks of a covered picnic area elsewhere at the 358-acre site. —Staff photos by Glenn Tanner 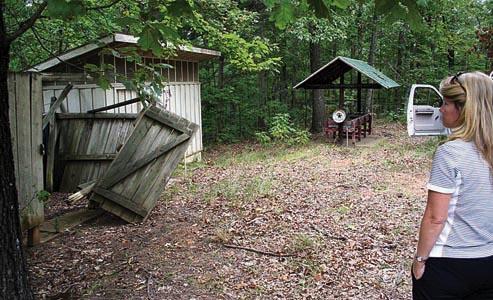 State planner Dawn Gale looks at the ruins of the old shower stalls (left) at a Camp Hazlewood campground site.

Gale shows the rotted planks of a covered picnic area elsewhere at the 358-acre site. —Staff photos by Glenn Tanner

State planner Dawn Gale looks at the ruins of the old shower stalls (left) at a Camp Hazlewood campground site.

It’s taking some time, but Camp Hazlewood is getting a makeover.

The 358-acre campground on Girl Scout Camp Road was bought by Henry County from the former Girl Scouts of Reelfoot Council for $1.5 million, prior to the council’s merger into the current Girl Scouts Heart of the South.

The property was then purchased from the county by the State of Tennessee earlier this year, and is now officially part of Paris Landing State Park.

Since May, state planner Dawn Gale has had the job of getting the camp ready for its new role as a group camping area, and hopefully, local outdoor educational center.

And, as Gale explained in an interview earlier this month, it’s been a challenging job.

“They don’t have anything in the state that’s like this,” Gale said from the former Barbara Mann troop house, where generations of Girl Scouts once registered for camp. “They’ve never added onto a park before.”

Negotiations to sell the property began in 2007. Gale thinks for at least that long, maintenance at the campground was neglected. For that reason, her job now is that much harder.

“It sat for over a year (after the sale) and the state didn’t do anything for it,” Gale said. “They cut the funds back. And now, all of a sudden, the roofs are falling through.”

In some camping areas, structures are beginning to decay. Shower stalls and other uncovered wooden structures have begun to collapse, while roofs on others show signs of rot.

“I’m going to lose this building,” Gale said later, standing beneath the rotted, moss-covered roof of a picnic area, daylight shining through several holes in the roof. “If I had a roof on it, I’d have a building,” she said.

Nearby, she points to one of the wooden-floored tents. Gale said because the tents had been left in place, exposed to the elements for more than a year, the fabric of the tents was now torn and rotted.

“If that had been pulled off every year, it wouldn’t have rotted,” she said.

“The Girl Scouts had a good setup,” she said. “They just didn’t keep it up,” referring to the former Reelfoot Council.

Another obstacle is the wilderness of the campground itself. Trees and vegetation have been busily reclaiming hiking trails and the camp’s basketball and tennis courts.

She’s been able to scavenge items like tables, chairs, display cabinets and even doors from state park inns at Reelfoot Lake and Pickwick Dam.

“I have scavenged doors, toilets, stainless steel sinks, chairs, pictures,” she said. “Anything that we’ve needed here has been scavenged.”

Today, the Barbara Mann building is filled with the results of some of that scavenging work. Gale hopes it will see use as part of a nature education center used by local schools.

“The new federal buzzword is ‘no child left indoors,’” she said. “So the new state thing is ‘every child outdoors.’”

If everything goes as Gale hopes, groups of up to 30 school children of different grades will visit three-four times a week, using the campground as a way of learning about science and math.

Different levels of camping will be available, starting with primitive sites. There also will be group camping sites that use many of the undamaged former Girl Scout sites.

These include platform tents with wooden floors and open-air cabins. Gale also has converted the former nurses’ cabin to a two-bedroom family cabin with kitchen.

Jolly Hall, the camp’s kitchen facility, will keep its familiar picnic tables, but now sports a stainless steel kitchen upgrade for the use of campers.

For recreation, campers will have access to basketball courts and baseball diamonds, as well as field land areas.