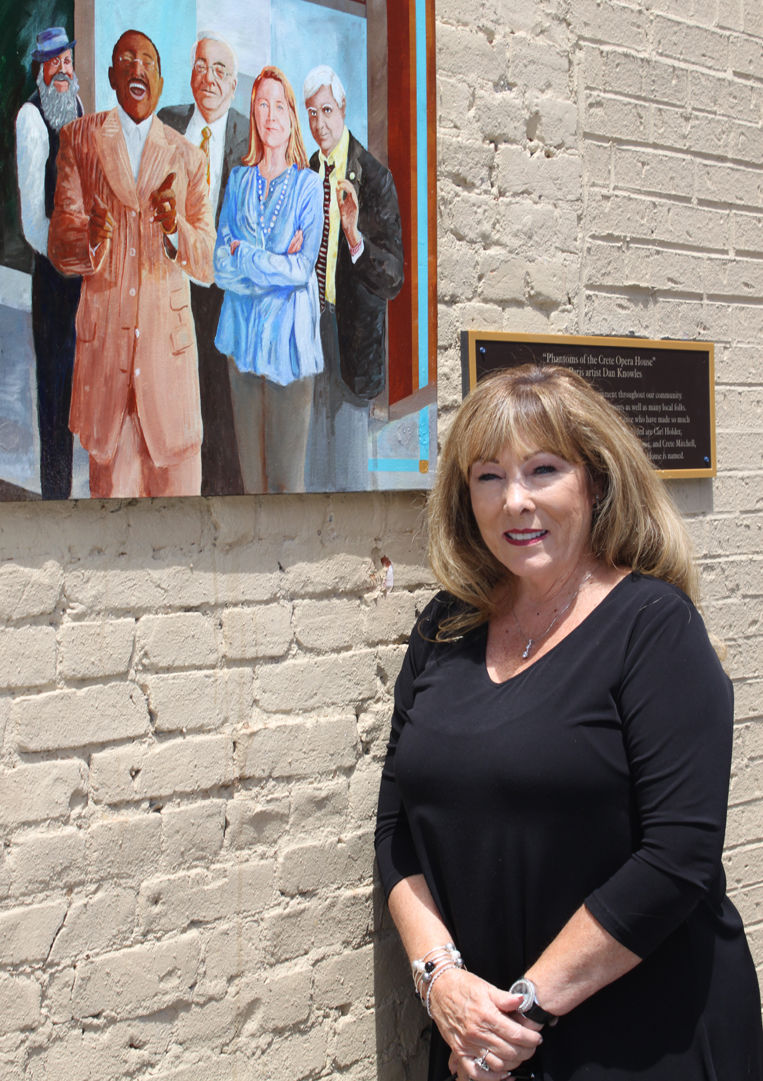 Kathy Ray is seen Thursday next to Dan Knowles’ “The Phantoms of the Crete Opera House” on display as part of the Windows of the West Alley portion of the Back Alley Paris project. 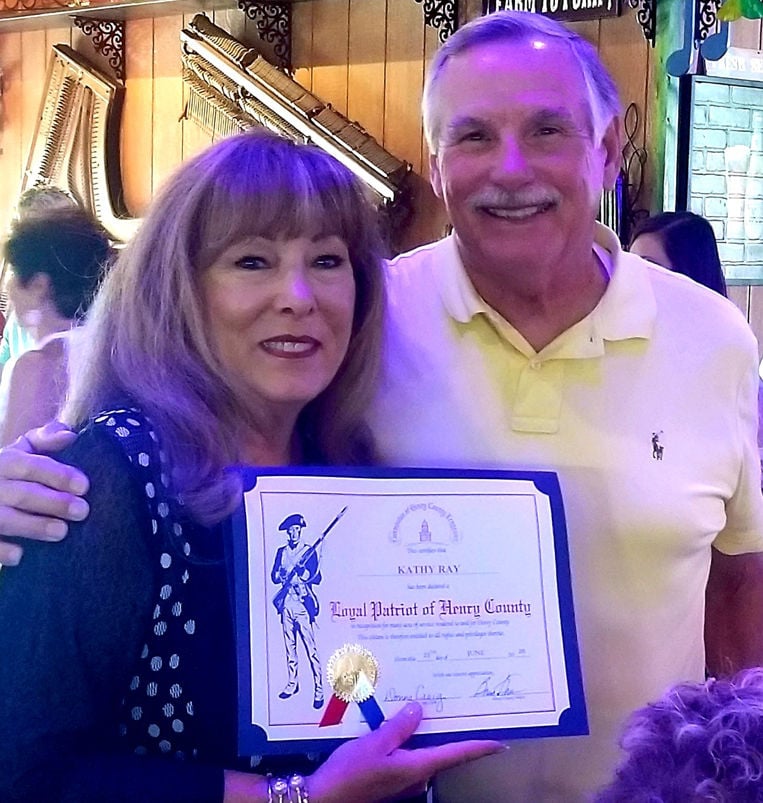 Kathy Ray holds the Loyal Patriot Award presented to her by Henry County Mayor Brent Greer during a Thursday farewell reception at a local restaurant.

Kathy Ray is seen Thursday next to Dan Knowles’ “The Phantoms of the Crete Opera House” on display as part of the Windows of the West Alley portion of the Back Alley Paris project.

Kathy Ray holds the Loyal Patriot Award presented to her by Henry County Mayor Brent Greer during a Thursday farewell reception at a local restaurant.

If you’ve gone to a major family-friendly event in downtown Paris in the past seven years, the odds are good that Kathy Ray played a big part in making it happen.

Whether you enjoyed a cool treat at the Downtown Ice Cream Social and Antique Car Show, watching the adorable little ghosts and goblins that come out to play during Spooktacular, or you took the chance to visit with Santa Claus himself, Ray was the lady behind the scenes making sure that things ran smoothly.

Now, the executive director of the Downtown Paris Association is stepping away from her job, and will begin her retirement as of Tuesday.

Some people are able to coast to a stop before retiring, but Ray said that didn’t seem to be in the cards for her.

“Actually, right now I’m writing a Back Alley grant that is due before July 1,” she said.

If you’ve seen some of the beautiful paintings decorating the alleys of downtown Paris, you’ve seen the Back Alley Paris project. Each new alleyway added to the project came into being with a grant written by Ray.

Thanks to the grant, what had been normal alleys are now decorated with colorful outdoor paintings and murals from the city’s past from local artists like Dan Knowles and John Monroe.

She’s also been the lady behind helping to turn the dumpsters in the downtown area into genuine works of art by artists like Millard Nichols.

The dumpsters are owned by the city, but local businesses pay to have them turned into art projects.

The most recent one was completed at Wofford’s Nursery.

“The first ones were done with a grant, and what that did is it got the community excited about ‘dumpsters can look that good?’”

Ray said she remembers thinking, “If we’re going to put dumpsters downtown, they’re going to look good. So that started the dumpster art.”

The art doesn’t stop there. If you have seen any of the cheerfully painted catfish statuettes in and around Henry County — again painted by local artists — Ray’s been the driving force behind that as well.

Ray said she was glad to see the downtown arts projects had been received with such enthusiasm.

“You just kind of want those things to catch on so people want to make everything beautiful,” she said.

TAKING THINGS TO THE NEXT LEVEL

Ray, who was appointed executive director in 2013, is actually finishing up her third career. A graduate of Henry County High School, Ray holds a bachelor’s degree from the now-University of Memphis, where she also graduated from the school’s Mid-South School of Banking.

She spent 15 years in senior management, specializing in marketing and customer relations, at Maybelline Worldwide Headquarters in Memphis.

She also has 22 years of experience in banking and finance, most recently as vice president of FirstBank.

It was while she was working at FirstBank that she became associated with the DPA in 2007.

She started as FirstBank’s representative to the DPA, and became the organization’s secretary.

“The more I learned about the organization, the more I thought, ‘You know what, I would just love to take this organization to the next level.’”

She retired from banking, and took on the full-time position, becoming the first executive director in the DPA’s history. From the start, she focused on trying to improve things.

“I’m all about more is better, and bigger is better. So I just looked at the different events that we had going on, and what could make that event better,” she said.

Since then, the time has flown by, and Ray’s goal for “more” and “bigger” has come to pass.

“I can just look at all of the things that have happened — from the artwork in the alleys, to the banners in downtown, to the new events we’ve added, and the mobile phone app — those things that were created during this time. So many things.”

The community that Ray has worked so hard for hasn’t been shy about expressing its appreciation.

In 2013, the same year Ray took on the challenge of DPA executive director, the Paris-Henry County Chamber of Commerce named her their Person of the Year.

In 2018, The Post-Intelligencer presented her with the Laura Dougherty Award for her creativity in promoting the community.

“When I think of Kathy Ray, the word that comes to mind is ‘enthusiasm’ in all that she does and about life,” Paris Mayor Carlton Gerrell said. “If every organization had a Kathy Ray, the world would be a brighter place.”

“Kathy’s undying and unyielding passion for Paris and Henry County is the trademark of her existence,” Henry County Mayor Brent Greer said. “I have never presented her with a task to assist and promote our community that she didn’t wholeheartedly support and make sure that the event or project was a success.”

In recognition of that enthusiasm, Greer presented Ray last week with the Loyal Patriot Award, the highest recognition county government can provide.

Ray said she’s looking forward to spending her newfound free time with her husband, Larry Ray. The couple plan to visit their son, Chris, daughter-in-law Wendy and their grandson, Jacob, in Memphis.

“My immediate plans are just to take a break,” she said. “Right now, I’m just going to enjoy summer, and get on the boat with Larry Ray and cruise the Kentucky Lake.”

She also will remain active in the community and the DPA — just not in a leadership role.

“I’m going to be a volunteer and a resource, and be as active as people need me to be,” she said. “But there’s going to be a new commander in charge,” Ray said.

That commander will be Travis McLeese, who will add DPA executive director to his existing duties as head of the Paris-Henry County Chamber of Commerce.

Ray is confident McLeese, along with the DPA board, will once again take the organization “to the next level.”

She also said she’s thankful to the community for supporting the DPA through so many of its projects.