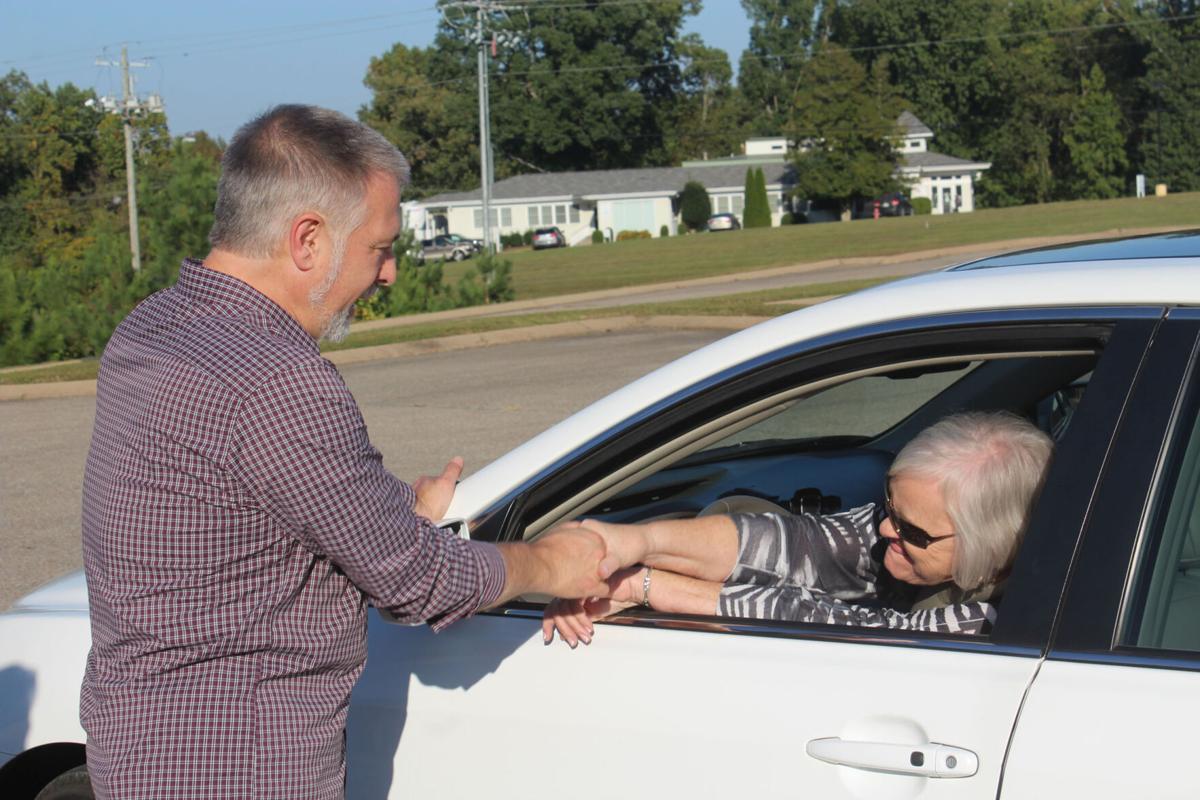 From left, former Henry County Medical Center surgeon Ray Compton greets Norma Thompson, one of his former patients, during his retirement ceremony on Oct. 7 in the parking lot of Bethel University’s Paris campus. To prevent a large gathering of people from forming, Dr. Compton came to the window of each visitor’s vehicle to speak with them while giving out cookies. Compton officially retired from working in the medical field at the beginning of October, after a 20-year tenure with the medical center. 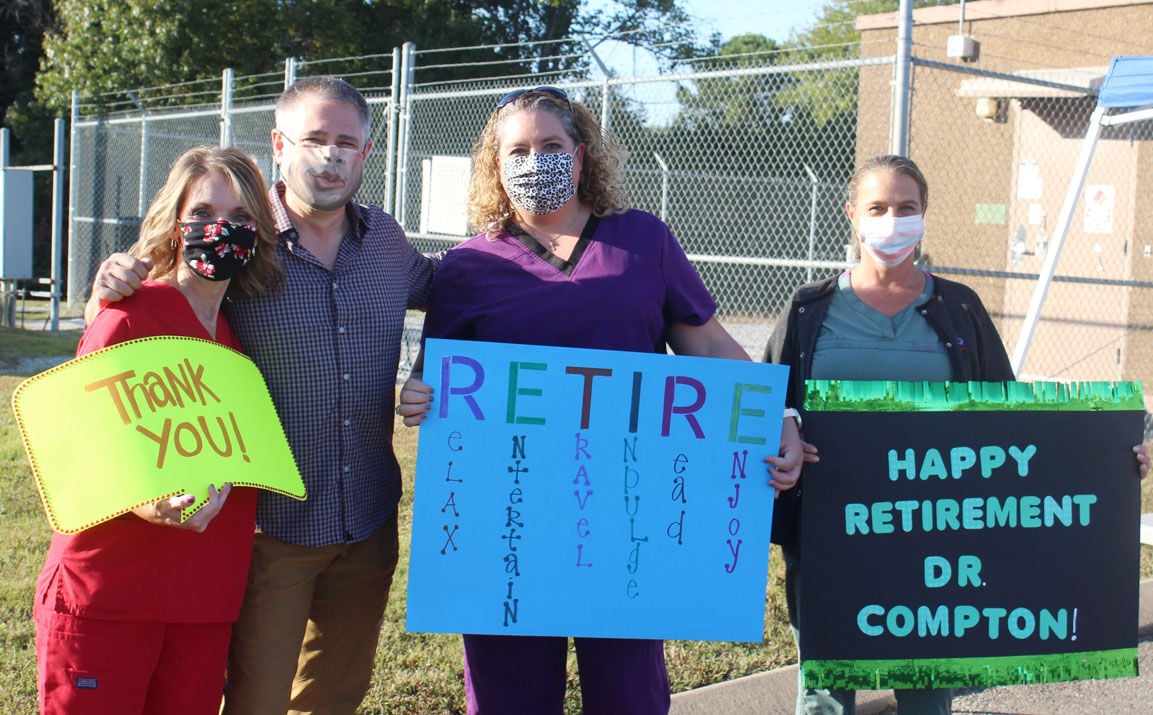 From left, former Henry County Medical Center surgeon Ray Compton greets Norma Thompson, one of his former patients, during his retirement ceremony on Oct. 7 in the parking lot of Bethel University’s Paris campus. To prevent a large gathering of people from forming, Dr. Compton came to the window of each visitor’s vehicle to speak with them while giving out cookies. Compton officially retired from working in the medical field at the beginning of October, after a 20-year tenure with the medical center.

After nearly two decades of service at Henry County Medical Center, surgeon Ray Compton made his retirement from medical work official with a farewell ceremony recently in the parking lot of Bethel University’s Paris campus.

The event required visitors to stay in their cars while talking with Dr. Compton at their driver’s side window, an effort to keep COVID-19 from potentially feasting on a large gathering.

That didn’t stop Compton’s former patients and friends from lining up to express appreciation and love for the former chief of surgery at HCMC, a testament to what made his tenure and practice here so special.

“I can’t imagine something more rewarding than being a small town general surgeon. You get to take care of people and get to know them, see them at Walmart and Helping Hand and the ball fields and church. You build relationships outside of the operating room, many of my colleagues in the big cities don’t get that,” said Compton. “That whole idea is, at the same time, one of the hard parts. You end up taking care of friends, going through their cancers with them and crying with them when someone dies and feeling so inadequate to meet many of their needs.”

Originally from Manchester, Compton studied and trained briefly in big cities like Memphis and Miami, yet in Paris he had a home that he preferred over big city glamour. The close-knit bonds that formed by working regularly with patients that became his friends gave Compton plenty of reason to never want to leave the area.

“Many times, you get the idea that someone feels like they need to go to Nashville to get the best care, not understanding that doctors like us practice here because we want to be here, not because we can’t practice over there,” said Compton.

Compton’s decision to retire came from an emotional base. The time off he had because of the COVID-19 pandemic helped him realize all the great things he’d be able to do, if he just had the time to do it.

“We were lucky enough to participate in starting airborne gymnastics here and I look forward to helping them out more from a facilities maintenance situation. I look forward to getting better as a church organist, I’ll hopefully be more involved with Helping Hand and I really hope I can continue to do mission work,” said Compton.

Compton shared stories of mission work that he’s been asked to do by non-governmental organizations. His first came in Iraq in the summer of 2017 working with an emergency field hospital. More recently, he was asked to staff a field hospital after an explosion in Beirut, Lebanon, in August left thousands of people there injured, homeless and devastated.

“It taught me very much about the portrayal of the average Muslim. I found the people that we worked with and took care of to be some of the sweetest, peaceful people I have ever come in contact with,” said Compton. “That was so awakening for me. That’s the kind of thing that I want to be able to have the freedom to do, to be able to say, yeah, I can be on a plane in three hours, where do you want me to go?”

Compton joked that he’ll be willing to go wherever his wife, Rhonda, will let him go.

Though Compton is ready to travel and experience more of the world, Henry Countians will still see plenty of him throughout town. Simply stated, the compassion and charitable nature of everyone in town will keep him from ever wanting to leave.

“It’s unlike anything I’ve ever experienced anywhere. When you look at the history of how Henry County gives, you take the amount of money that’s given for Helping Hand plus the Livestock Auction at the fair and it gets close to $750,000 just in donations,” said Compton. “This small, rural community raises to help its own. Why would we want to live anywhere else? I can’t imagine a better place to live out my retirement. There’s no shortage of enjoyment here. It really is a hidden gem for people who don’t know about this place.”