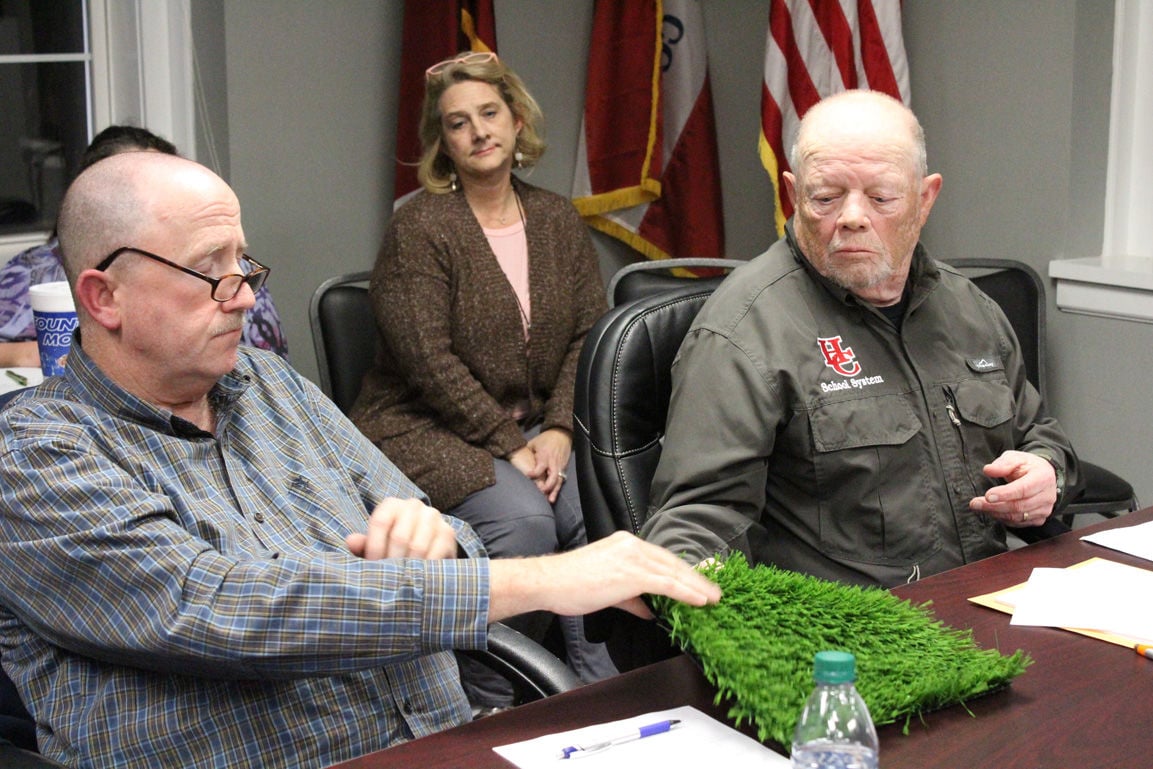 Henry County Board of Education members Jim McCampbell (left) and Rod Frey (right) touch a piece of the artificial turf being considered as a replacement for the current Bill Hudson Football Field. Current field conditions and a few replacement options were discussed at the board’s meeting Thursday. 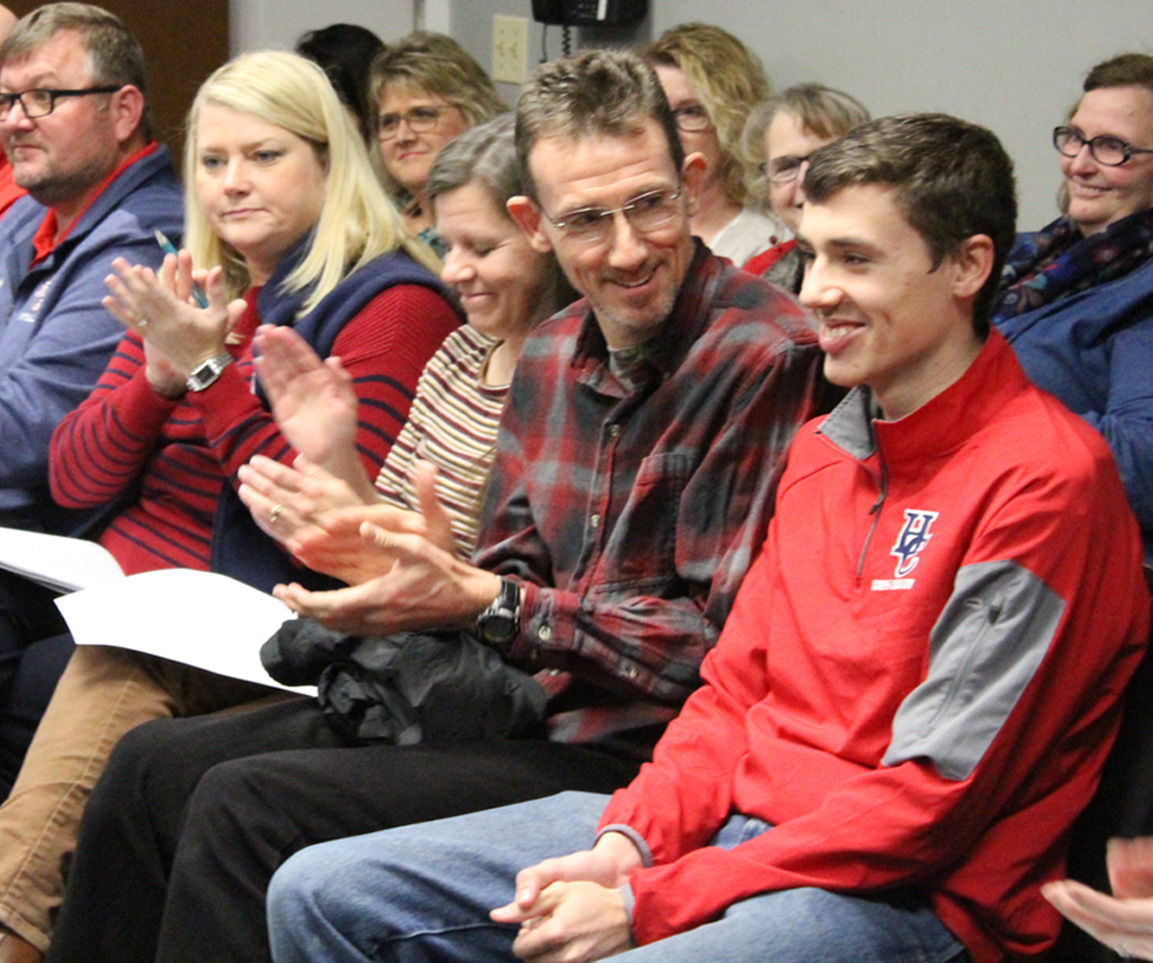 Henry County High School track athlete Silas Winders (right) is applauded at Thursday’s Board of Education meeting for winning the TSSAA state cross country Division 1 large school championship this year. Winders will be following his older brothers to the University of Southern Indiana this fall.

Henry County Board of Education members Jim McCampbell (left) and Rod Frey (right) touch a piece of the artificial turf being considered as a replacement for the current Bill Hudson Football Field. Current field conditions and a few replacement options were discussed at the board’s meeting Thursday.

Henry County High School track athlete Silas Winders (right) is applauded at Thursday’s Board of Education meeting for winning the TSSAA state cross country Division 1 large school championship this year. Winders will be following his older brothers to the University of Southern Indiana this fall.

The question of new turf for the Bill Hudson Football Field at Patriot Stadium arose again Thursday at a meeting of the Henry County Board of Education, but no decision was made.

Andy Collins, representing the Henry County High School Quarterback Club, made a presentation about the quality of the current field, which retains a lot of water for an extended period of time after rainfall and is showing significant wear and tear.

Mike Poteete, athletic director for the Henry County School System, said plywood, covered with rubber mats, was necessary to go over holes on the field, caused by drainage pipes.

Director of Schools Leah Watkins said the problem goes beyond aesthetics, and extends to player safety and long-term durability.

“We have a problem, and we are going to need a solution  for it,” she said. “We have a few options for that solution.”

Board member Rod Frey said he walked on the field when it was dedicated to the late Coach Bill Hudson, and said walking on it was “terrible.”

“I don’t see how those guys play on that field,” he said.

The presentation included a drone video of the field from goalpost to goalpost, highlighting areas of water retention and damage.

HCHS Band Director Kyle Graves said the inconsistency of the field’s condition was difficult for his students.

Marching bands are harder on a football field than the actual players, given that they travel in exact paths and don’t wear cleated shoes, but the need to practice remains.

Graves said there were days during band camp that they couldn’t practice at all because of field conditions.

Currently, the band rehearses in the outfield of the baseball field. The walk to and from that field takes valuable time from rehearsal.

Graves also pointed out the possibility of hosting band competitions if the field was improved here.

Band competitions generally bring between 15 and 20 visiting bands to a hosting school, and can generate up to $20,000 in revenue, not counting local commerce.

He said that game ends up rescheduled or canceled many years because of rain or a wet field.

Poteete said it costs about $24,000 to maintain the natural field over the course of a year.

Collins said the turf can handle up to 20 inches of rainfall in an hour, and it’s shown to decrease athlete injuries.

An audience member asked where Collins’ numbers came from, and Collins said they were from Shaw Sports Turf, a company that specializes in synthetic turf.

Board member Tom Beasley pointed out the board has brought the artificial turf request to the Henry County Commission before, and it was not accepted.

He said if they wanted to go in the direction of artificial turf, they would need to find a way to get the county government on board with the idea.

The board decided to discuss the matter of replacing the field at a work session to be scheduled for later in the month.

In other meeting business:

• During a work session prior to the meeting, members of the board discussed donating their salaries to better the school system in some way. One idea was to do it through scholarships given to students. The total amount to be donated, after taxes, would be roughly $9,000.

Beasley suggested some of that money go to teachers, classrooms, or programs in the system rather than to award college scholarships to students.

He also suggested scholarships for teachers continuing their educations.

“We’re not really in the business of scholarships on the school board,” he said. “But we try to better the school system as a whole.”

Watkins said they could add stipulations to the scholarships if they chose to do that, including having students who received the scholarships sign something saying they would come teach in the system upon graduation.

She said they could also add experience with children to the selection criteria — meaning students who have volunteered or worked in day cares or tutored younger students would be considered more seriously than others.

Board member Josh Frey asked if scholarships would be recurring or one-time only.

Watkins said they could possibly allow upperclassmen to apply for the scholarships again.

Jill Coker, board chairman, said the board would need to consider the possibility that future board members would not want to donate their salary.

Watkins said they could change the budget line item from “board salary” to “board scholarships,” as long as board members were not required in some way to take a salary.

Beasley said extra money could be contributed to the account by board members or outside parties.

He also said he would like for $3,000 to be dedicated to education scholarships, and $6,000 to be awarded to the top teachers in the system.

The board decided to revisit the topic at another work session which will be scheduled for later in the month.

• The board passed a policy to include offenses in recommendation letters if an employee is let go because of  inappropriate behavior.