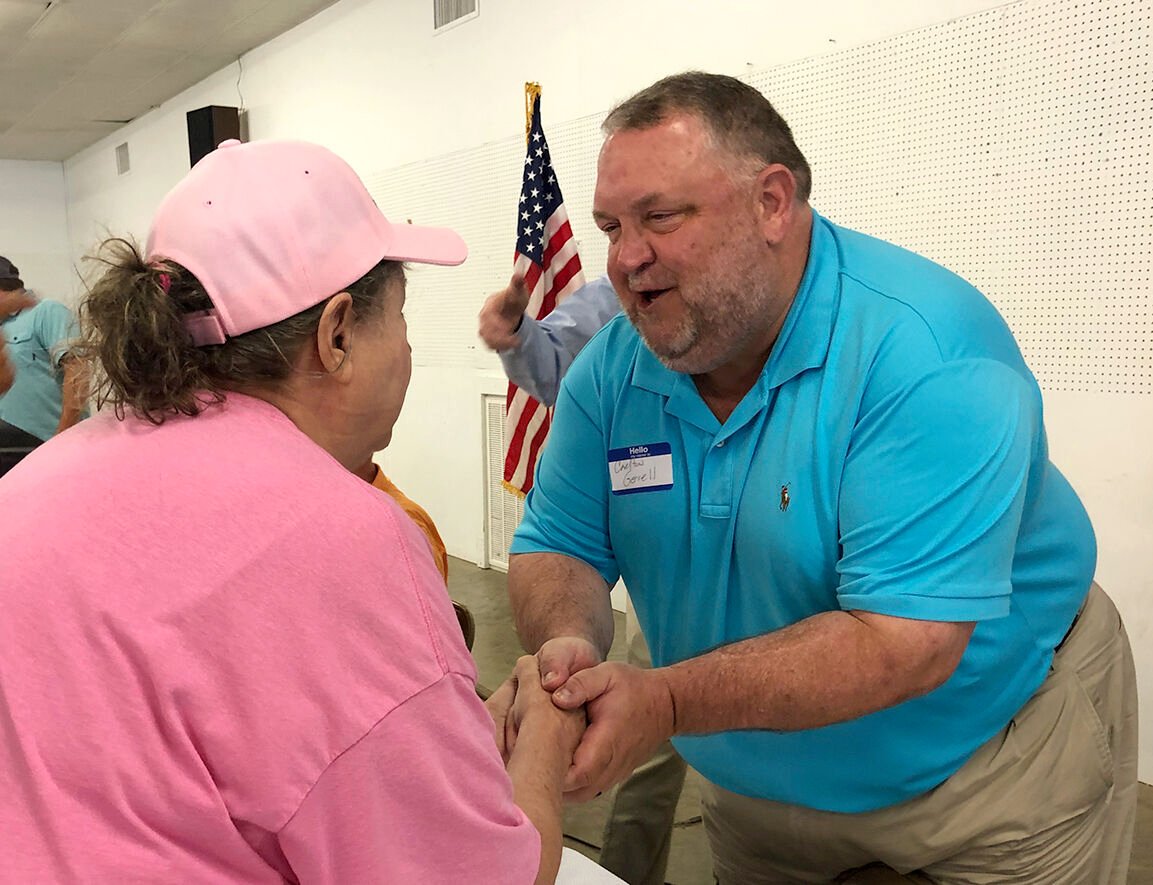 Carlton Gerrell accepts the congratulations of a supporter after receiving the Henry County Republican Party nomination for County Mayor. 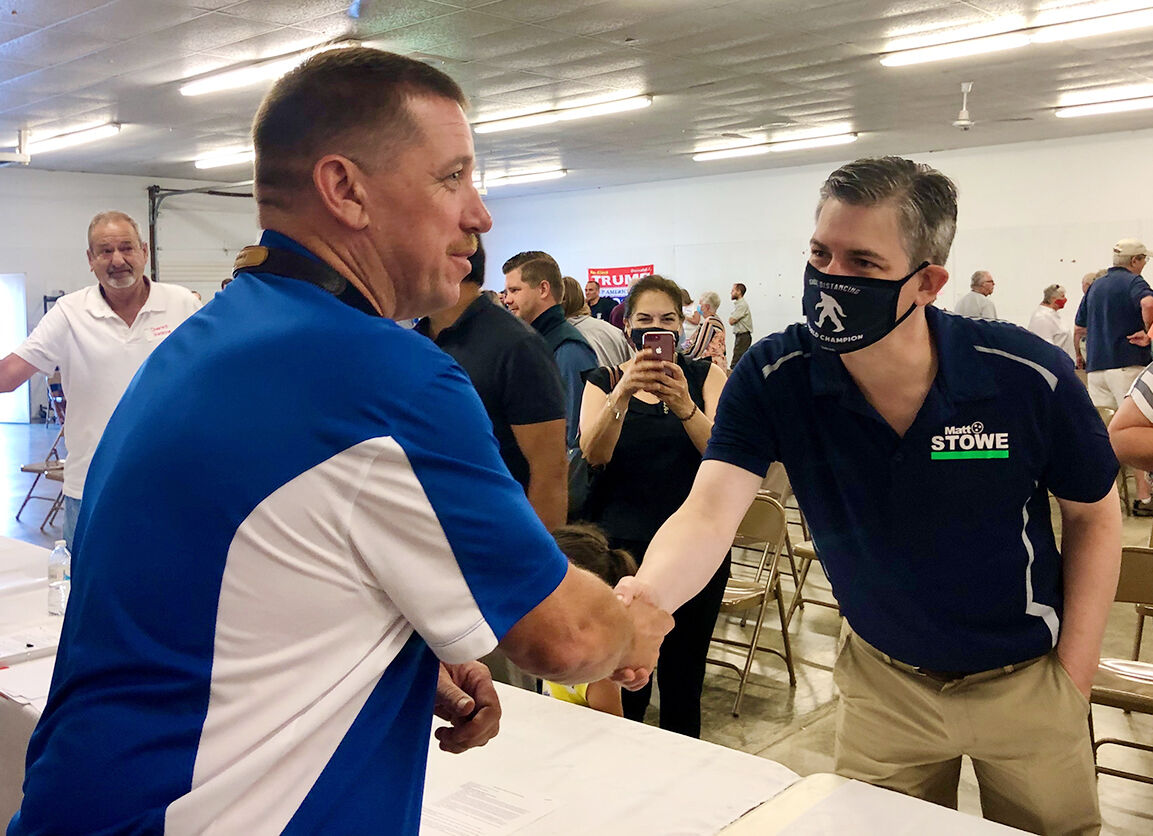 Josh Frey (left) is congratulated on receiving the Henry County Republican Party nomination for Sheriff by Matt Stowe, District Attorney for the 24th Judicial District, on Saturday after the party's caucus at the Henry County Fairgrounds Enoch Building.

Carlton Gerrell accepts the congratulations of a supporter after receiving the Henry County Republican Party nomination for County Mayor.

Josh Frey (left) is congratulated on receiving the Henry County Republican Party nomination for Sheriff by Matt Stowe, District Attorney for the 24th Judicial District, on Saturday after the party's caucus at the Henry County Fairgrounds Enoch Building.

More than 300 registered Republicans filled the building for the caucus, which was overseen by state party Chairman Scott Golden.

Frey was the only candidate to receive a nomination for sheriff, and was subsequently nominated by acclamation. The nomination was made by Randy Gean, a 1st District county commissioner and former chief deputy under Sheriffs David Bumpus and Monte Belew.

Damon Lowe, the current chief deputy, has declared his candidacy and picked up papers to run as an independent. He did not attend the caucus. Lowe is fulfilling the duties of sheriff since Belew’s recent resignation.

Gerrell, who is pastor of Tennessee Valley Community Church, was nominated by Bruce Griffey, state representative for the 75th District.

“I have spent the last several years preparing for this job,” he said. “This is something I’ve had my sights set on for many, many years.”

He was one of three men nominated as the party’s candidate for Henry County mayor.

After both men declined the nomination, Gerrell was elected by acclamation.

All three candidates were given a chance to speak, with Gerrell accepting the nomination and making remarks on his qualifications. Visser, who spoke first, said the party already had two good candidates for the office, and withdrew his name from consideration.

Wirgau, who announced his candidacy shortly after the resignation of incumbent County Mayor Brent Greer, noted in his remarks that Gerrell and Frey had both picked up paperwork to run as an independent candidate, but that he, Wirgau, had not, instead wanting the Republicans to put him on the ballot as their candidate.

Most of the people in the room already knew who they planned to vote for, he said, and because of the circumstances, he had no time to change their minds.

“Having no time to campaign and try to persuade you that I am the right candidate for the job seems unfair,” Wirgau said, adding he could not put his fate in the hands of a few hundred people out of thousands of Henry Countians.

He then said he regretfully declined the nomination.

Immediately following the caucus, Wirgau picked up paperwork to run as an independent candidate, according to DeLaina Green, county administrator of elections.

If he submits qualifying paperwork prior to the deadline at noon Wednesday, that would make a three-man race for Henry County mayor, with Gerrell running as a Republican, and Wirgau and John Penn Ridgeway, who had previously turned in paperwork, both running as independents.

Saturday afternoon, Lowe issued a statement saying that he had been asked to attend the caucus, and stated his reasons for not seeking the Republican nomination. It reads as follows:

“I was recently asked by the local Republican Party to seek nomination in the Republican caucus. I declined because I feel that as Sheriff of Henry County I want to be a Sheriff for everyone! I don’t believe the Sheriff nor his office should have any political party affiliation. I do not want anyone to feel they cannot talk to me or trust our office simply because they were on a different political ticket.

“I want to serve the people of Henry County for who they are and what they need, not because they have an R or a D beside their name. I feel that by running as an independent candidate, each and every Henry Countian will have the opportunity to vote for who they feel can best fulfill the office of Sheriff regardless of political affiliation.”

Your comment regarding not having an "R" or "D" behind your name is exactly how I have felt for years!

I want a Sheriff who is for the people, not a particular political group!

All candidates running should be Independents. I vote for the individual I believe will perform their job in a respectful and fair way!

I am not voting for them based on their political beliefs!

Why are there no mask or social distancing. Unless everyone respects others and practice safe measures to help irradiate COVD 19 it will continue to spread through out our community. I think this is shameful and the leaders of our community should be ashamed of themselves.