Tony Brannon, a longtime farmer north of Puryear who is a former co-owner of B&G Equipment west of Paris, will retire Jan. 1 as the first dean of the Hutson School of Agriculture at Murray State University.

“I’m so blessed,” said Dr. Brannon, who turned 63 in October. “I have to pinch myself regularly. I live at home on our family farm and work nine miles away at a well-respected, regional university that values agriculture.

“I have a wonderful wife, Lisa, a great family and friends everywhere.”

Brannon then taught ag at Peabody High School in Trenton for four years before leaving in 1986 to earn his doctorate in agriculture at Oklahoma State University in Stillwater in 1988.

He said Murray State tried to hire him in 1987, but he turned them down to finish his doctorate. Undaunted, MSU agreed to hire him as soon as he graduated.

“I wanted to come home to farm in Puryear and teach at Murray State,” Brannon said, adding that, other than a few scholarships and working as a graduate assistant at both universities, raising dark-fired tobacco paid for all of his education.

He said Murray State later reorganized in 2000 into five colleges and the School of Agriculture. That distinction seemed to separate the school’s graduates when they were announced at graduation after that, Brannon said, and led to the school being elevated in prestige. “I always liked that.”

In 2011, the school was renamed the Hutson School of Agriculture when the Hutson family donated a large endowment and their nearby farm to the school.

When Brannon joined the MSU faculty, the Department of Agriculture had 288 students. He said jokingly he was assigned to spend half his time teaching ag education, half in ag mechanics and half recruiting, adding that he worked for half the pay he deserved. Brannon soon was teaching the first agricultural computer classes, just because he actually owned a computer, an AppleIIGS.

Now, the Hutson School of Agriculture has 1,187 students, which makes it one of the top five U.S. non-land-grant universities by enrollment, he said.

Brannon said the MSU presidents and provosts have always been very supportive of the school, even when he took a sabbatical in the fall of 2021, when he planned his future retirement.

MSU always prefers faculty to retire on a Jan. 1, he said, adding that he chose what year to retire based on his favorite number, 7, a perfect and complete number in the Bible. He realized that the digits in 1-1-23 add up to 7 — and that’s how he made his decision.

He groups things in sevens and when teaching Bible class at Puryear Baptist, “a small, rural, country church,” he rewards accomplishments by having everyone clap seven times. Besides being a longtime Bible class teacher, he’s also been a longtime deacon there, like his father and grandfather before him.

Brannon and his brother, Tim, founded B& G Equipment with Steve Gallimore; later, Gallimore left to found and preach full-time at Tennessee Valley Community Church. Now, Tim Brannon is the sole owner, but still raises corn, soybeans and wheat with his brother on the family farm. Tony Brannon says he drives the tractors and other equipment, and his brother fixes them.

“I’m going to keep farming,” Brannon said. “I have no other future plans yet. Only the Lord knows, and he’s not telling.”

He did add that he and his wife, Lisa, are scheduled to become grandparents in March — so that should keep both of them pretty busy.

He was also instrumental in forming the West Kentucky AgBioworks Initiative to promote Agri-Energy in the region. In 2008, he became involved with Memphis Bio Dimensions and was one of the members of its 25 Farmer Network and serves on a five-state regional steering committee.

Brannon has led several successful USDA and NSF grants during his long 34-1/2-year tenure at Murray State. Most recently, he has served as a member of the Kentucky Department of Agriculture’s Hunger Initiative Statewide Task Force, where he has represented the region in addressing the problem of food instability across the Delta Region and Commonwealth.

Brian Parr, the school’s assistant dean, said, “As far a being a leader, he is exceptional, always has our best interest at heart. We couldn’t ask for a better leader.”

He said he was hired shortly after Brannon became dean, worked for two years before going elsewhere, then returned to MSU eight years ago.

Brannon said Dr. Parr would be a wonderful successor, but MSU will conduct a national search for his replacement.

He ended by pointing out that he, his wife and two sons have 10 MSU degrees among them, and brother Tim and his two daughters have another three degrees from the university.

“I’m very proud of that legacy.” 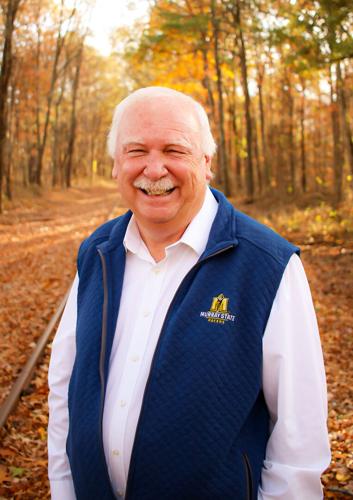 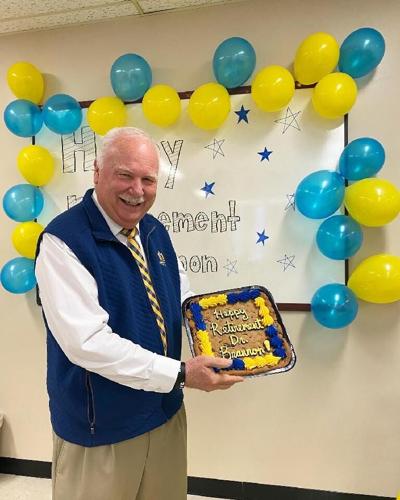 Tony Brannon of Puryear shows off his retirement cake, presented to him by the faculty and staff of the Hutson School of Agriculture at Murray State University. He’ll retire after 34-1/2 years on Jan. 1, which is why the white board encircled with balloons behind him says, “Happy Retirement Day — Soon.”

Tony Brannon of Puryear shows off his retirement cake, presented to him by the faculty and staff of the Hutson School of Agriculture at Murray State University. He’ll retire after 34-1/2 years on Jan. 1, which is why the white board encircled with balloons behind him says, “Happy Retirement Day — Soon.”