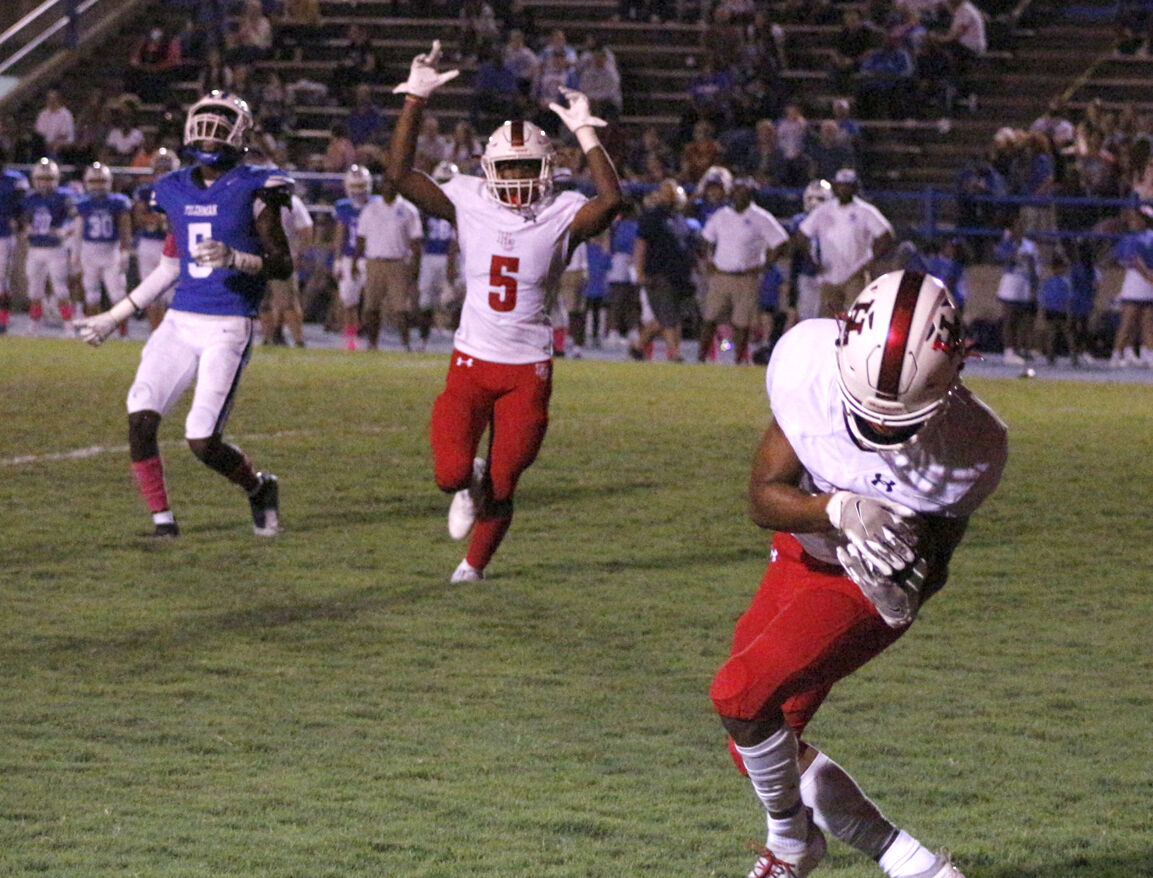 Henry County wide receiver Norman Duncan (right) pulls in a touchdown pass in the back of the end zone during the first quarter of the Patriots’ 28-14 loss to Tilghman on Friday in Paducah. Patriot Julius Guthrie (5) celebrates on the play. 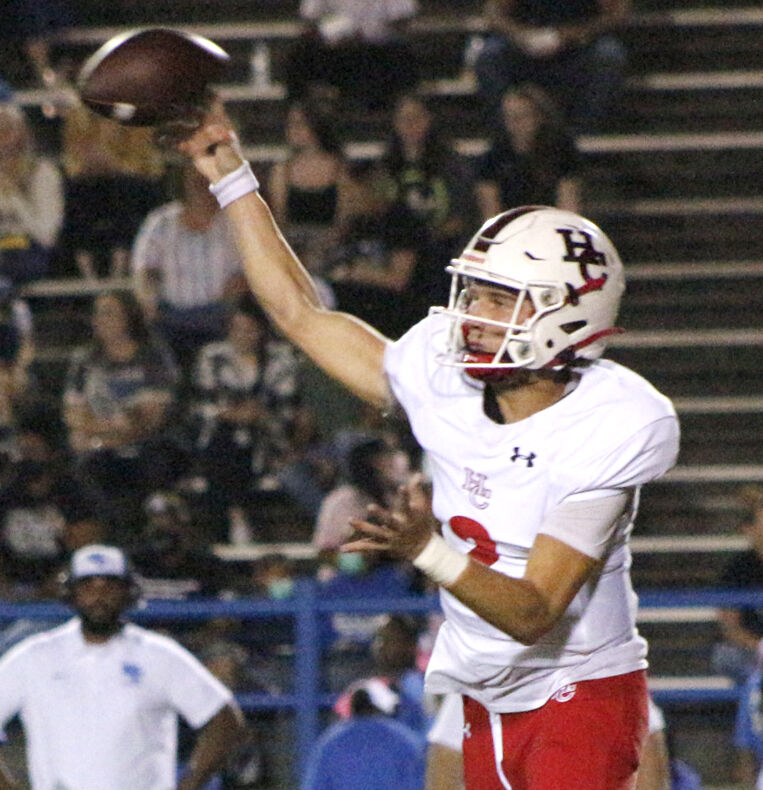 Henry County quarterback Ryan Damron throws a pass on Friday in the Patriots’ 28-14 loss to Tilghman at Paducah. Damron became the school’s all-time leader in career passing yardage at 2,655 yards during Friday’s game.

Henry County wide receiver Norman Duncan (right) pulls in a touchdown pass in the back of the end zone during the first quarter of the Patriots’ 28-14 loss to Tilghman on Friday in Paducah. Patriot Julius Guthrie (5) celebrates on the play.

Henry County quarterback Ryan Damron throws a pass on Friday in the Patriots’ 28-14 loss to Tilghman at Paducah. Damron became the school’s all-time leader in career passing yardage at 2,655 yards during Friday’s game.

The first meeting between the long-time football powers became the tale of two halves. Henry County controlled play through most of the first half and took a 14-7 lead into the locker room at intermission. The second half turned into a frustrating experience for the Patriots as they couldn’t add points and couldn’t quite get the Blue Tornado stopped enough times to win the football game.

“Tilghman did a great job up front and that little back they have is a shifty guy. They just made a few more plays than we did,” said Patriot head coach James Counce Jr. after the contest.

Henry County slipped to 3-5 on the season with the Patriots’ second straight loss. The Patriots will enjoy a bye week this week before returning to Region 7-5A competition Oct. 22 at Northeast High School in Clarksville.

“This fall break may be coming at just the right time for us,” said Counce. “We have several guys that are playing with bumps and bruises and some other guys that are out. Maybe we can use the break to get some of these guys closer to one hundred percent. I feel sure that will definitely help us a lot to get those guys back.”

Counce said the Patriots can bounce back from the losses the past two games.

“I told them it is gut check time. What we have to do is go back to work and figure this thing out. Hopefully, this means enough to these guys that they will want to do that and they will work hard to get it figured out and be ready to go,” said Counce.

Early in the game, Tilghman drove inside the Patriots’ 20-yard line before a penalty pushed the Blue Tornado back to the Henry County 22. Facing a fourth down and 15 play, Tilghman decided to run an offensive play instead of attempting a field goal and were able to get receiver Shemari Thomas behind the Patriot defense to haul in a 22-yard scoring pass from quarterback Jack James to give Tilghman a 7-0 lead.

The pass elevated Damron to the top spot on the program’s list for career passing yards. He finished with seven yards passing in the contest but that moved his career total to 2,655. Calvin McNairl (2004-06) had held the record at 2,650.

The touchdown pass is the 27th of Damron’s career, which leaves him one behind the Patriots’ career leader Will Parrish (2017-18) who has 28.

Henry County took over the ball and picked up two first downs before stalling and having to punt. Tilghman mishandled the punt, with the Patriots recovering the ball at the Blue Tornado 14.

The Patriots picked up a first down before Caden Marshall sprang into the end zone to score on a four-yard run that gave the Patriots a 14-7 halftime lead.

RIDER TAKES OVER THE GAME

Tilghman tailback Malachi Rider took over the game in the second half with run after run picking up enough yardage to keep the chains moving for the Blue Tornado. He tied the game midway through the third period with a 13-yard scoring run and gave Tilghman the lead near the end of the period on a three-yard run.

Rider finished the game with 40 carries for 216 yards.

Henry County was only called for four penalties in the contest but two holding calls short-circuited a pair of early fourth-quarter drives.

For the second time in the game, Tilghman faced a fourth-down call inside the Patriot 25 with 25 seconds left. The result was the same as James passed to Brian Thomas for a 23-yard touchdown that made the final score 28-14.