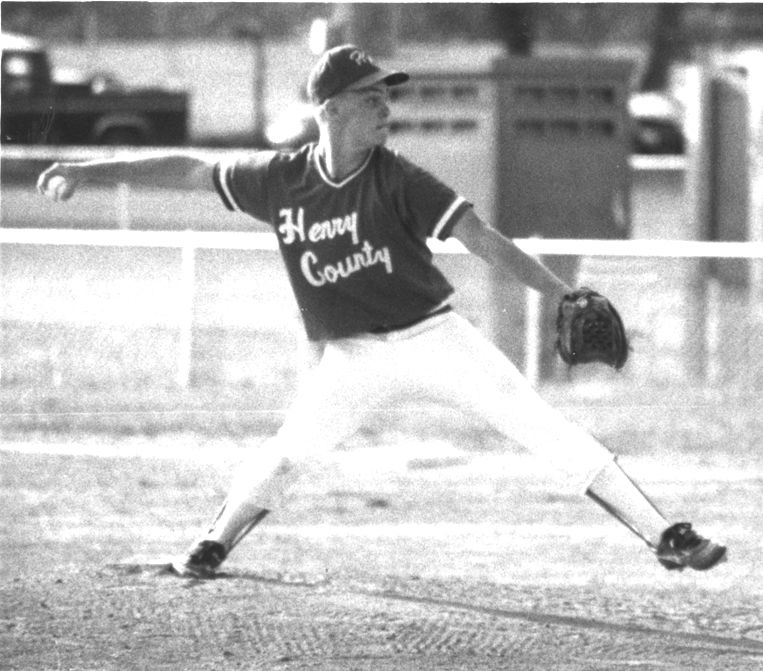 Former Henry County High School standout Doug Barner hurls a pitch to the plate during an early 1990s game at McNeill Park. Barner starred for the Patriots as a hitter, as a pitcher and at shortstop during his career. 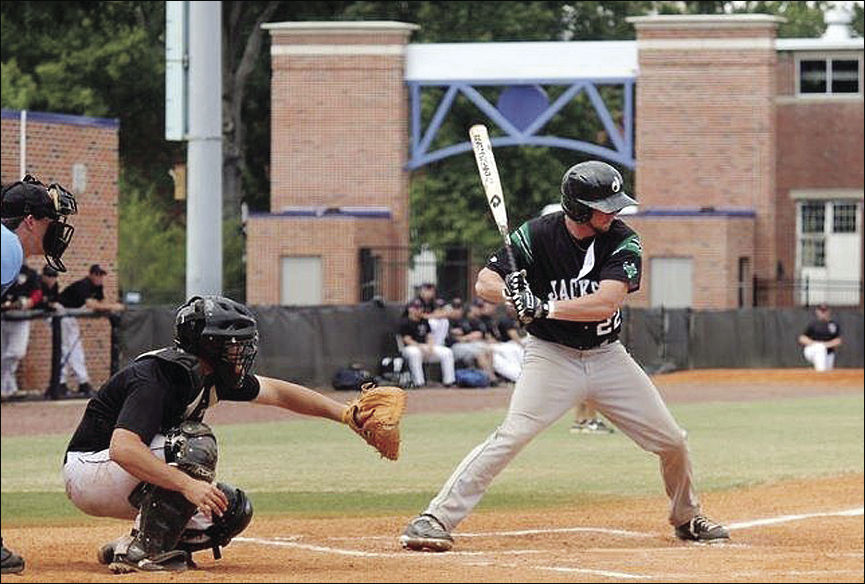 Former Jackson State Community College slugger Kane Barrow stands at the plate during a 2013 game. He was announced as a first-team All-America selection by the National Junior College Athletic Association during his sophomore season. He would later transfer to the University of Memphis to complete his career.

Former Henry County High School standout Doug Barner hurls a pitch to the plate during an early 1990s game at McNeill Park. Barner starred for the Patriots as a hitter, as a pitcher and at shortstop during his career.

Former Jackson State Community College slugger Kane Barrow stands at the plate during a 2013 game. He was announced as a first-team All-America selection by the National Junior College Athletic Association during his sophomore season. He would later transfer to the University of Memphis to complete his career.

Baseball teams at Henry County High School have been filled every year with some outstanding individual performers.

Which has made it hard to decide who to pick for my All-Tee Pee Talks fantasy baseball team made up of Patriots who have played since 1985 when I began covering sports at The Post-Intelligencer. I’m going to fail to mention some really good players and I’m sure many of our readers might pick an entirely different roster but that’s okay.

On Tuesday, I named my coaching staff of Paul Putman, Brian Welp and Jeff Morris. I’m going to give that group an infield today and my next column will list my catchers and outfielders.

Patriot coaches have had the luxury of having first basemen who could both dig throws out of the dirt and put the bat on the ball with authority. Players like Jon Davidson, Russell Boyd and Jamie Osbron all were good enough to fill that spot at HCHS and for college programs later in their careers.

I’m going with a tall, rangy player who began his career as a really promising catcher but had some arm troubles and wound up at first base. Kane Barrow could hit whatever a pitcher threw to the plate and hit it a long way. He first carried his big bat to Jackson State Community College before moving on to a successful career at the University of Memphis.

I’m going to back him up with another first baseman who played much the same way. In the late 1980s, Brian Webb swung a hot bat in the middle of the Patriots’ lineup, then went on to play at the University of Tennessee at Martin. He is now the baseball coach at Inman Middle School.

When I first started covering games here, players like Rob Hessing and Steven Harrison were playing second base. In the mid-1990s, Eric Greer and Anthony Caldwell stood out as second sackers.

But, I have to go with Matthew Harrison (1989-92) as my starter. He could hit, steal bases and turn the double play with the best of them.

The coaches will have a hard time keeping my backup, John Raymond Hehn (early 2000s), off the field, too. Hehn would catch the ball and hit the ball into the gaps with regularity. He played in college at Christian Brothers University in Memphis.

There is a long list of standouts who played shortstop. So many that I’m moving at least one man to another position to be sure I get everyone I want into my lineup.

Some of the all-time great Patriots shortstops include Kevin Taylor, Mark Elkins, Will Parrish and Hunter Frey.

The player who is going to get my starting nod would start for any team he was a member of. Doug Barner terrorized HCHS opponents as a shortstop, power hitter and pitcher from 1989-92. He helped lead the Patriots to within one game of a state tournament berth in 1992 when Henry County dropped a 10-0 decision at Montgomery Bell Academy in the sectional playoff game in Nashville. That MBA team played future National League Cy Young Award winner R.A. Dickey at shortstop that day.

Barner went on to a stellar career at Middle Tennessee State University and spent time in the Tampa Bay Rays minor league system. He is also a former head coach of the Patriots’ baseball team.

Current Patriot baseball coach Shane Kemp will also be on my team and play shortstop. Like Barner, Kemp played great defense, hit like a demon and was a great pitcher for the Patriots. He went on to play at MTSU and for several years in baseball independent leagues.

Back in the mid-1980s, Mickey Barker could play a good third base for the Patriots but he’ll mostly be remembered for his golf swing instead of his bat in baseball. In the late 1990s, Kirk Holtgrewe had a great glove and hit well while in the early 2000s, Justin Stutzman made every all-star team around. I’m going to throw in Skylar Haley with this group at third base although he moved all over the field and pitched extremely well for the Patriots. Cody McSwain is just finishing up a strong college career at Freed Hardeman after playing well at third base for HCHS.

Let’s go back to my early years for my starter at third base. I’m going to pick a player who is probably the Patriot who was most similar to major league legend Pete Rose. That would be Richard “Soup” Raymer. Raymer loved to play baseball and loved to get dirty while he was doing it. He’d do anything to beat you. He had a great glove and a great arm that also made him a successful pitcher. Raymer played in college at Columbia State.

Coming right behind him during this time was Blair Gardner. Gardner could give you starting quality innings at third base, shortstop, first base and catcher. He hit the ball with authority and finished his college career as a standout catcher at Bethel. He’ll be the backup at third base and anywhere else that Putman will need to use him.

So that gives me Barrow and Webb at first base with Matthew Harrison and Hehn manning second base. Barner and Kemp will hold down shorstop with Raymer and Gardner filling the third base position. It’s really hard to do better than those players but I’m going to try to outshine them with the catchers and outfielders.

TOMMY PRIDDY is a Paris native who has been sports editor at The Post-Intelligencer since 1985. He can be reached by email at sports@parispi.net.