A season-ending loss often overshadows all the accomplishments a high school sports team has throughout its season.

It’s natural for fans, players and even coaches to mostly remember the Patriots’ 31-24 loss to Dyer County on Nov. 22 in the quarterfinals of the Class 5A state playoffs at Patriot Stadium.

“You know, there were only eight teams playing last Friday in the playoffs but there were a whole bunch more who wished that they had gotten that opportunity,” said Patriot head coach James Counce Jr. “But every year, every team is going to be disappointed by a loss in their last game except the one team that wins the state championship.

We lost in the state championship game last year and we were really disappointed all winter. This year, we sure would have liked to have had the opportunity to play in Cookeville again.”

Counce said obviously the Patriots had some great highlights this year like winning the Region 7-5A championship for the third straight season. Henry County has now played in the quarterfinal round of the playoffs in seven of the last nine seasons.

Odoms set two school records in the loss to Dyer County. He hauled in eight passes for 136 yards, which are both records. One of his catches was a 75-yard scoring bomb from Damron.

Here is a look back on the Patriots’ 10-3 season that started with losses at Haywood County and Beech before the team went on a 10-game winning streak.

Henry County opened its season in Brownsville against a Haywood County team that had advanced in 2018 to the Class 4A state championship game. The Patriots battled to within a 10-7 score in the first half but the Tomcats showed their strength with two second-half scores while blanking Henry County to pull away to a 24-7 victory.

The Patriots played the game and the next contest, too, without starting tailback Jayln Foster who was nursing a hamstring injury.

During the game, senior defensive lineman Duncan Bennett suffered a torn labrum. Bennett chose to play the rest of the season with the injury but it took some time for him to adjust to having one arm basically tied down.

It was another road trip to one of Class 5A’s top powerhouses to play Beech in Hendersonville in the season’s second game.

But the Patriots dropped the contest 22-20 when a short field goal attempt sailed wide as time ran out. Or did it? Counce said after the game he thought the kick went inside the upright but it wasn’t called that way and the Patriots fell to 0-2.

The Patriots got their first win by running away from Dyer County 48-14 at Patriot Stadium in the season’s third game. Foster returned for this game and ran for 79 yards and two scores although his use was limited.

Henry County would go undefeated in region play for the second straight year. The Patriots scored more than 50 points against Kenwood and West Creek while handily beating Clarksville, Northeast and Northwest.

Winning the region guaranteed the Patriots that their first two playoff games would be at Patriot Stadium.

A 21-14 victory over Class 6A power Brentwood in the fourth week of the season served notice to the state that the Patriots could play with anyone.

Henry County took a 14-7 first-half lead but Brentwood tied the game in the third quarter.

Junior Jayden Kendall ran for a fourth-quarter touchdown to give the Patriots the victory over the Bruins.

The second Class 6A opponent was Germantown. The Red Devils had undergone heavy graduation losses and had endured a coaching change but the team that took the field at Patriot Stadium on Oct. 4 looked to be big, fast and formidable.

To prove the point, the Red Devils grabbed a 3-0 lead before Henry County answered with 23 straight points to win the game. Foster and Kendall both scored touchdowns against Germantown and junior kicker Darrius Stephens hit three field goals.

The Patriots have had a strong rivalry with Memphis Ridgeway over the years. The Roadrunners are known for having lots of size, great speed and playing tough. They showed all of that but the Patriots battled for a hard-fought 10-6 victory.

All the scoring was done in the first quarter and the defenses took over from there. Senior Joseph Travis ran four yards for a Patriot touchdown with Stephens adding a field goal.

In the second round of the playoffs, the Patriots played host to region rival Clarksville. Henry County ran past a vastly improved Wildcats squad 42-14.

Odoms started the game by catching a 60-yard bomb from Damron and caught another scoring pass.

Foster ran for 104 yards and a score. Johnson and Travis also ran for touchdowns. 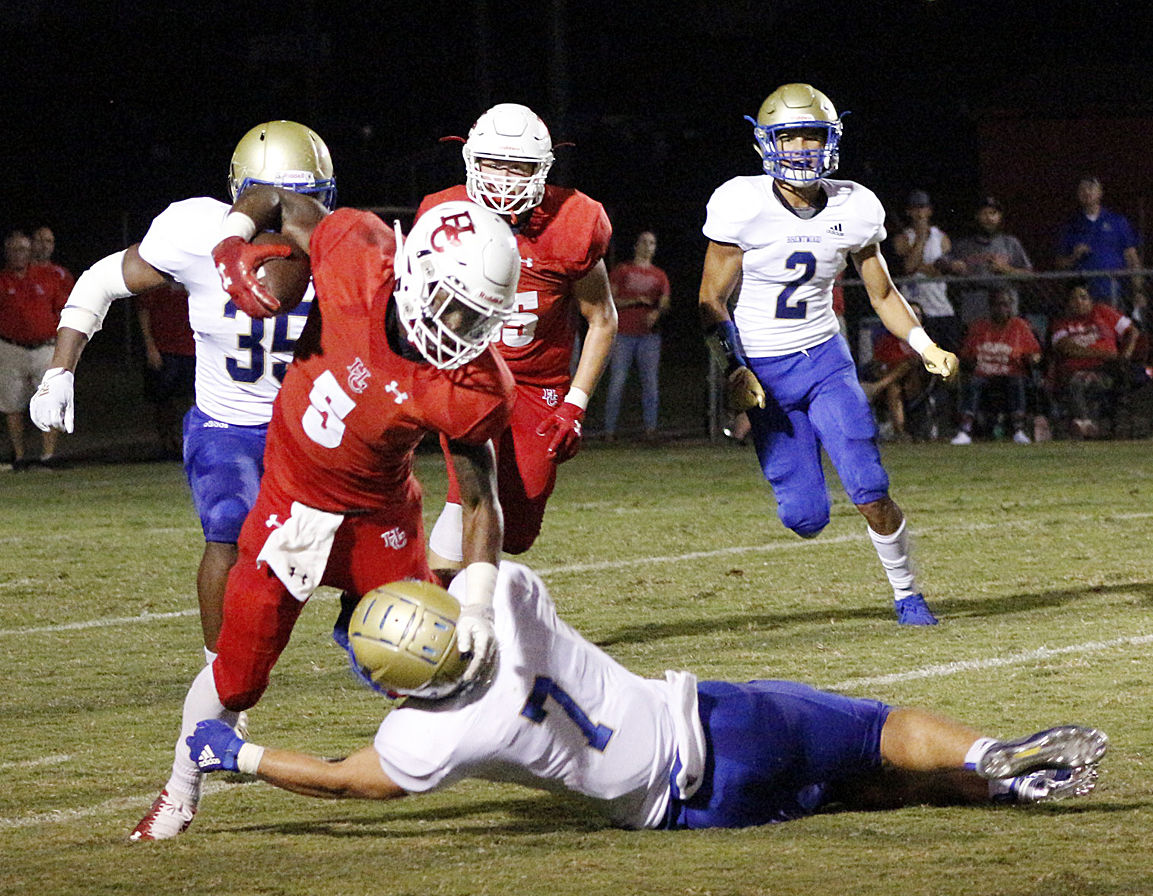 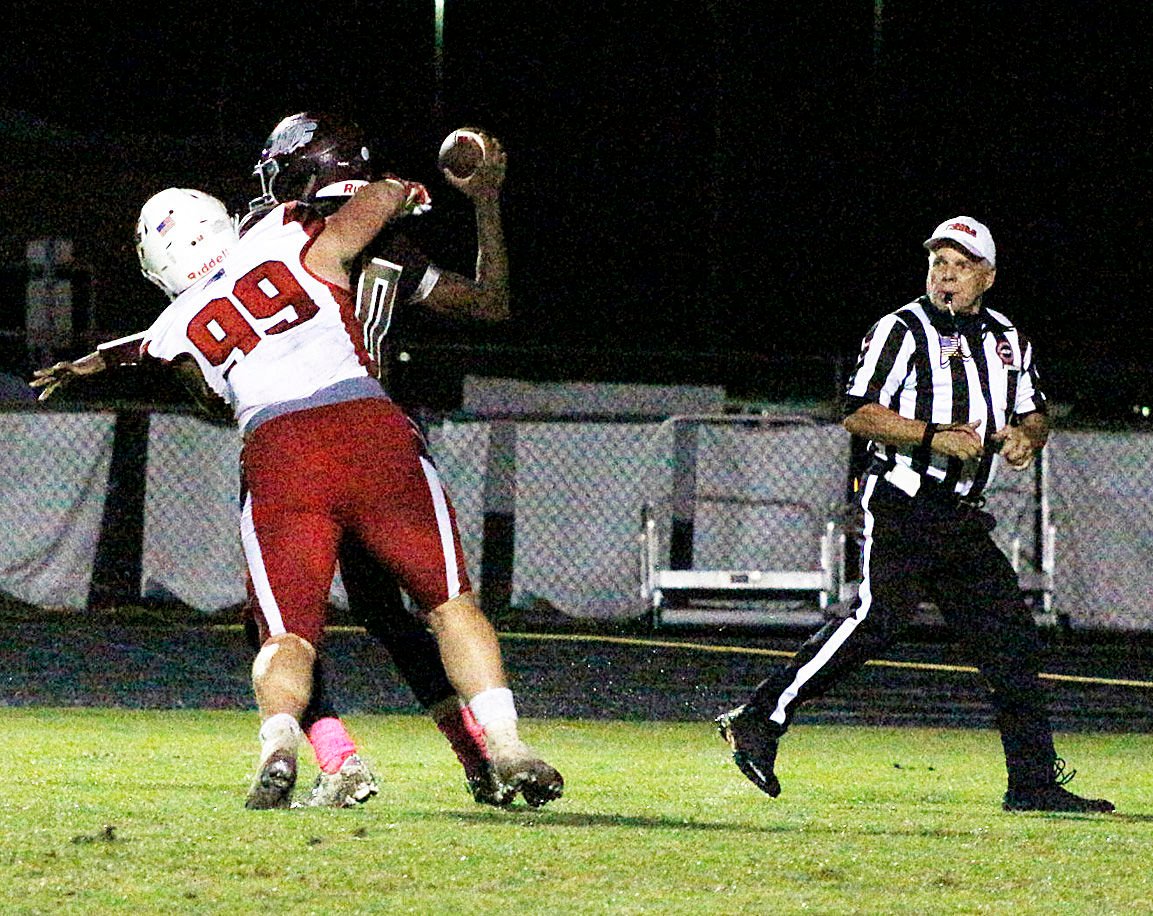 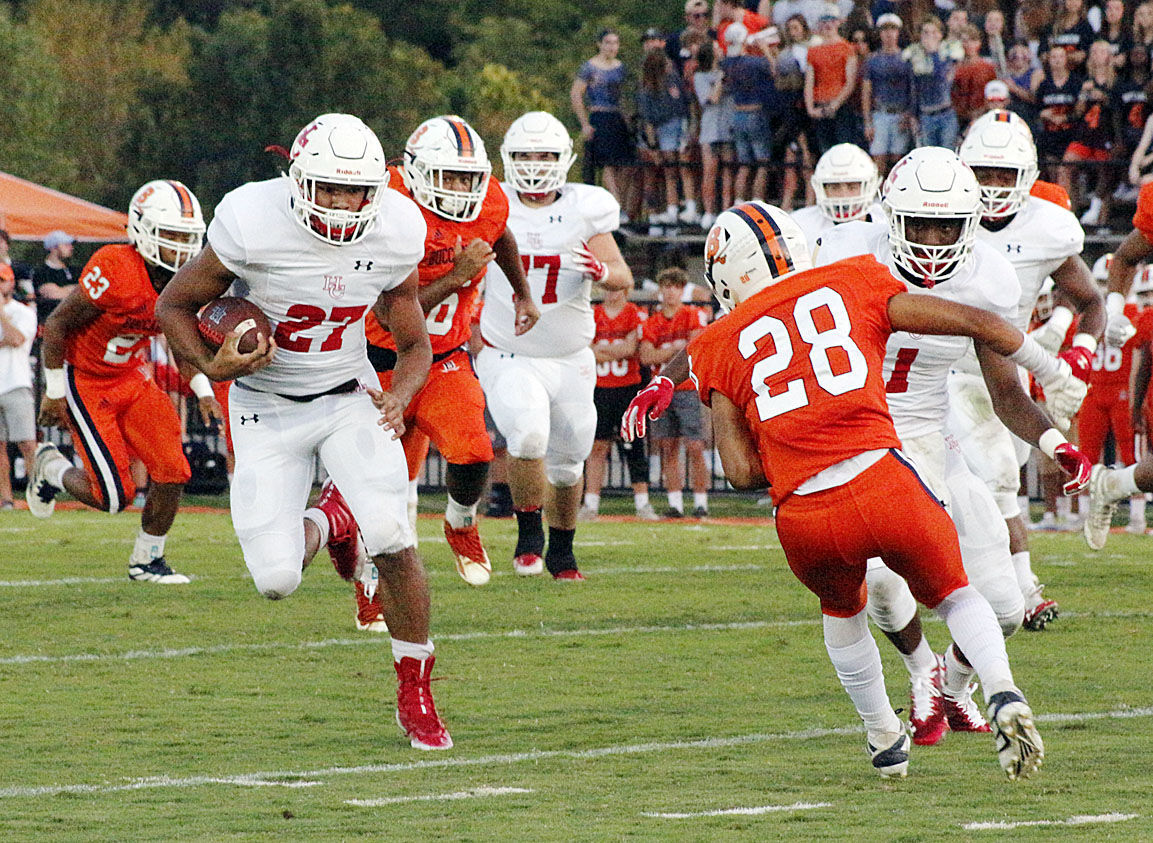 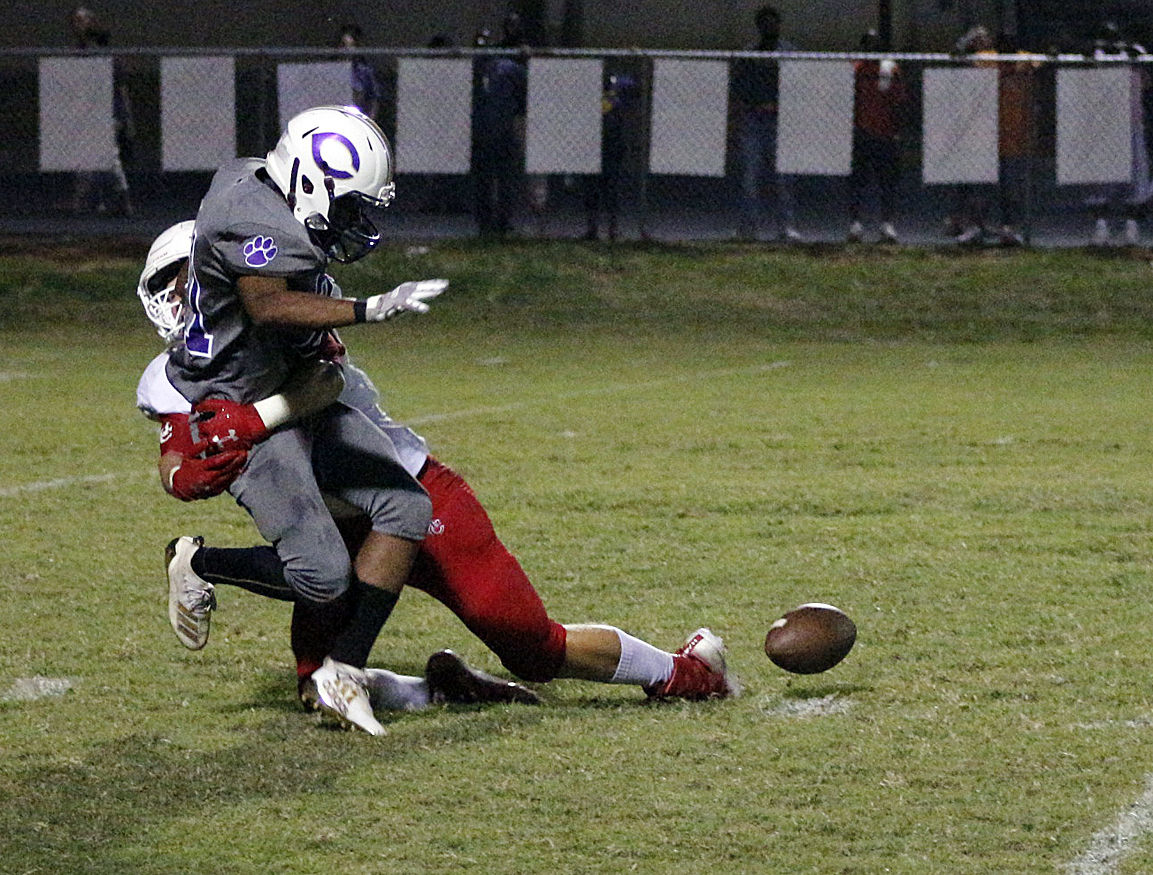 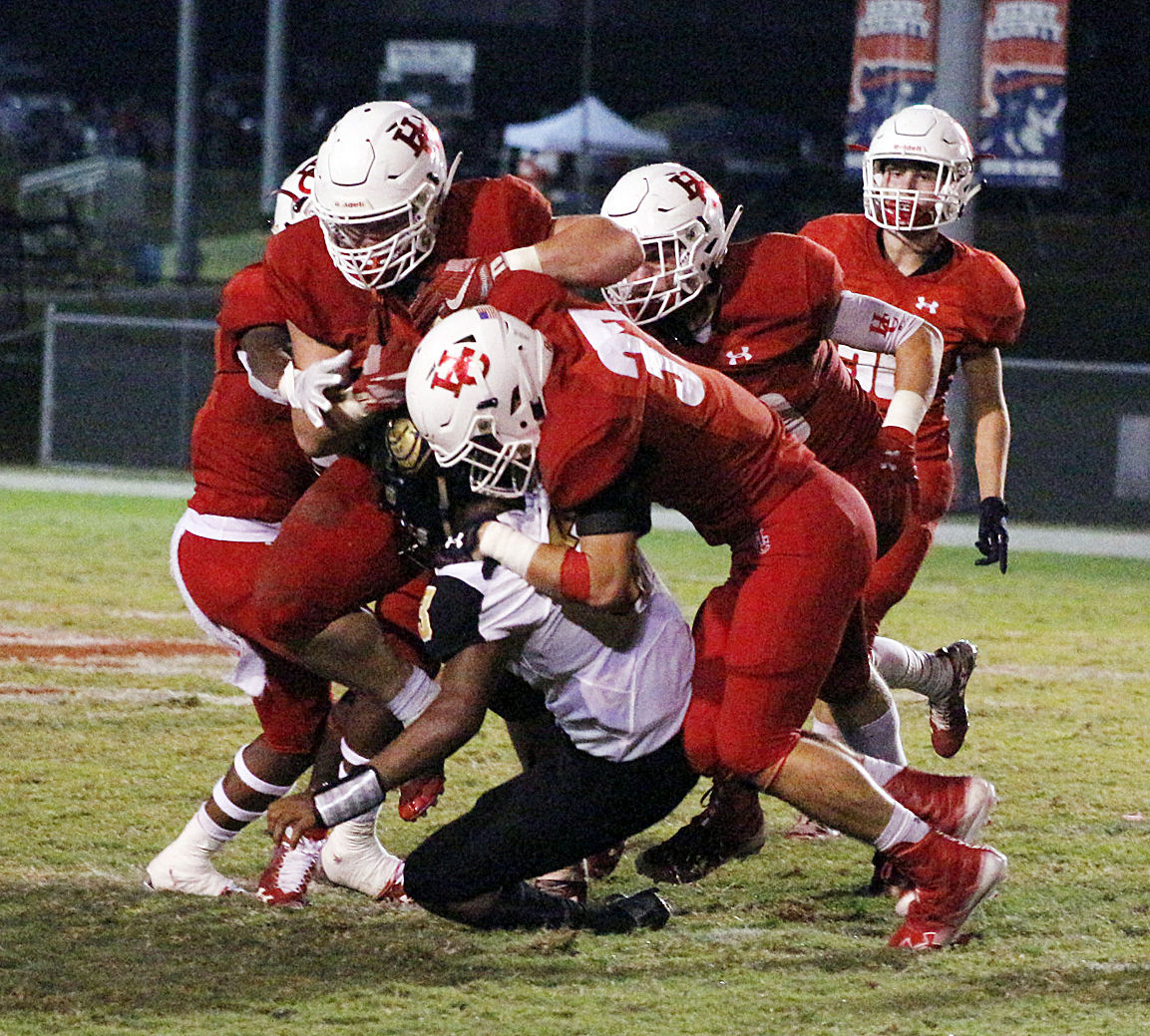