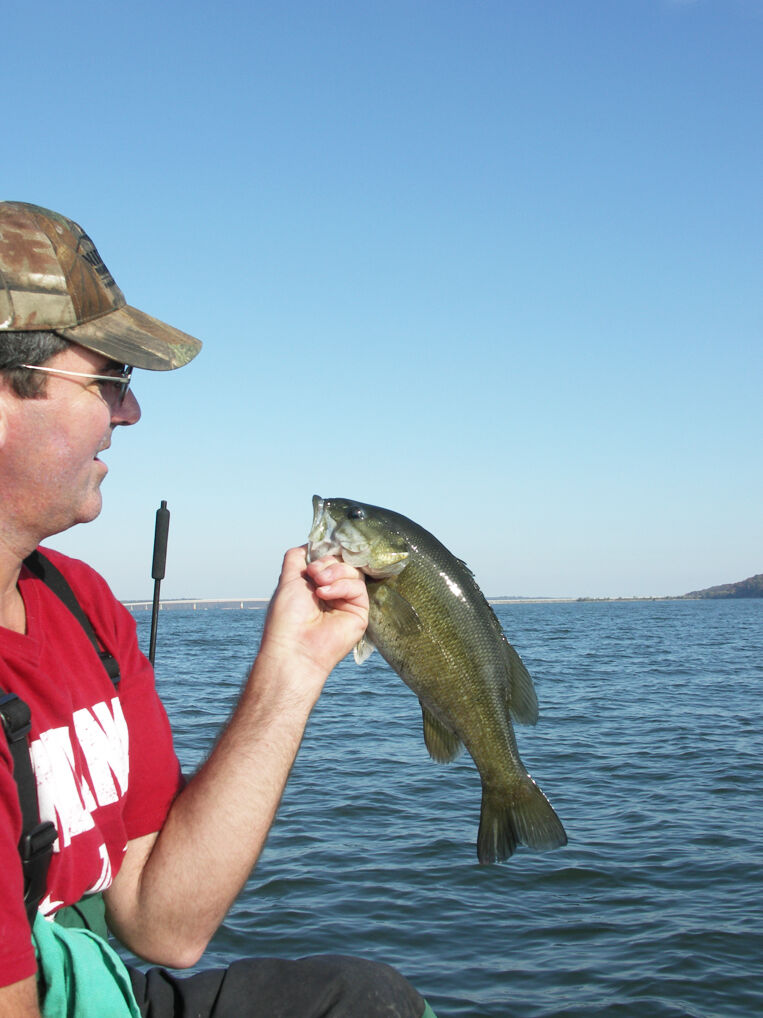 Summer smallmouth sometimes show up on the lines of deep water bass anglers this time of year. Others resort to night fishing in an attempt to beat the heat now that the dog days are here. If you’re tired of the heat, just remember every day brings the transition of fall that much closer.

Summer smallmouth sometimes show up on the lines of deep water bass anglers this time of year. Others resort to night fishing in an attempt to beat the heat now that the dog days are here. If you’re tired of the heat, just remember every day brings the transition of fall that much closer.

Kentucky Lake’s fishing scene was the beneficiary of a rare early August cool snap this week that brought a touch of fall to the early morning air. Anglers had a little hurdle with some northeast wind but it was a small price to pay for the lower humidity and temperatures.

For a few days, the breeze switched to the north and got rid of some of the haze and humidity.

It appears the overall outdoor scene is already on a path to heat back up as the long range forecast has temperatures climbing back to the 94-degree range for highs by early next week.

Cool spells down south in August have reputations for short honeymoons.

Meanwhile, lake levels have fallen slowly this week and the reservoir is staying around the 358-feet elevation in the Kentucky Dam sector. Upstream in the New Johnsonville area, lake levels are slightly lower with readings in the 357.9 range.

Surface temperatures have been starting out the mornings around 83 degrees and climbing to 87 by midday. The recent cool snap had a slight effect but temps have already rebounded. Water color remains clear.

There has been a little current this week along the main Tennessee River channel and that seemed to stimulate a sluggish catfish bite that had fallen victim to very little moving water. A few mornings the current kicked in by midmorning and the bite improved after a sleepy start.

Some decent stringers of blue catfish are still coming in from anglers working the main channel areas. Depths of 35 to 45 feet are still producing. Nightcrawlers are still the best bait going. That’s been the case most of the summer, too, although some anglers have reported success on cut shad, chicken livers, catalpa worms and various commercial stink baits from local tackle shops.

Most summer catfishermen try to locate schools of baitfish in the deep water and they also target the down current sides of feeder creeks or irregular lips or submerged bends in the river bank. Such areas offer submerged eddies and divert the current just enough to harbor comfort zones for meandering schools of shad.

Locating the submerged balls of baitfish on the down current side of a ditch or big feeder creek where it empties into the main channel are often productive areas. Watching your sonar unit is important as it will help lead you to the baitfish activity and that’s where Ole’ Whiskers is likely to be lurking.

A few reports have come in from some summer crappie fishermen who are relying mostly on live shiner minnows to entice bites from sluggish slabs.

Although most anglers think the hotter the weather the deeper the fish, that may not always be the case. Some crappie are holding in midrange depths of 12-15 feet and some are still residing in 10-12 feet back in some of the larger bays.

Sometimes that’s where the baitfish are schooling and the crappie are going to follow their forage base. So, where the schools of threadfin and gizzard shad are swimming is where you’ll find crappie.

And, often times the dissolved oxygen levels are better for the fish in those midrange depths, so that’s a factor, too, as to why the fish reside in such depths.

In times past, peak fishing for schooling white bass occurred in August as the fish would push the shad up over shallow sand bars, resulting in surface feeding frenzies. Hitting the white bass in the jumps was and is about as good as fishing can get. They’re in hot pursuit and will tag just about any spinner — Rooster Tails are one of the best choices — or lure that mimics a baitfish.

Unfortunately, sightings of white bass have diminished drastically in this region of Kentucky Lake.

An occasional jump may be seen here and there along the river channel, but it’s short lived. Finding and catching a big number of white bass is indeed rare these days, although some areas north and south along the reservoir still yield a few.

Bass fishermen have struggled lately to put together any consistent pattern during the hot weather. There have been some fish taken by anglers mostly targeting main lake ledges and humps. However, they haven’t reported any schooling activity.

More boats have turned to night fishing lately, too, as they try to beat the heat. Tossing big willow leaf spinnerbaits out on sloping points that protrude into deep water sometimes works. Others like to fish rip-rap roadbeds near the main lake area or gravel banks.

Mayfly hatches were underway last week at various areas up and down the lake. Watch for that to continue for another month or so.

When you’re out there on the lake these days and hot weather sort of begins to test your mettle, just remember that every day makes the seasonal transition of fall that much closer. Hang in there.