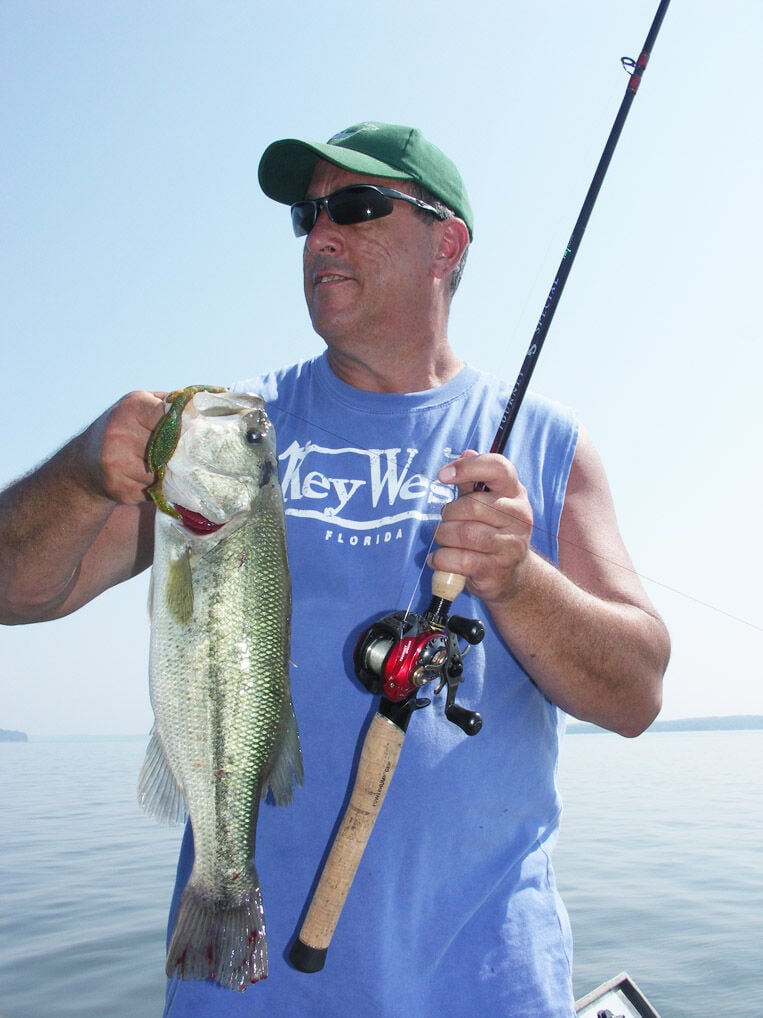 Summer bass patterns on Kentucky Lake can vary at times depending on the baitfish, but ledge fishing is always popular when using Texas and Carolina rigged worms and craws. While using a green pumpkin-pepper colored Storm Brush Hog, angler Don Popp shows a nice one taken from a main lake ledge.

Summer bass patterns on Kentucky Lake can vary at times depending on the baitfish, but ledge fishing is always popular when using Texas and Carolina rigged worms and craws. While using a green pumpkin-pepper colored Storm Brush Hog, angler Don Popp shows a nice one taken from a main lake ledge.

Remember back in the spring when nasty north winds whipped up whitecaps across the open waters of Kentucky Lake? Bone chilling winds cut like a knife and anglers had to pull up the hood on their jackets while attempting to find a fishing spot on the leeward side of a cove or bay. Chances are you were in that situation back in late March, April or perhaps a few days in May. It was a stubborn spring. Odds are you uttered to yourself or your fishing friends that you weren’t going to complain once the hot and humid days of summer arrived. Well, here they are. That barking sound you hear are the dog days of summer sounding off. Best take another sip from the water jug or bottled ice tea. Hot temperatures are gonna hang around until early September so just suck it up. This week’s fishing scene hasn’t changed much from last week, as both surface temperatures and lake levels are holding their own. Lake levels actually came up a few short inches from last week. Last week’s elevation in the Kentucky Dam area was 356.6 feet, but this week the reservoir has risen slightly and climbed back to 358.8 for a few days. Watch for TVA’s curve for the annual drawdown, which began in early July, to resume and elevation will likely fall by this weekend and into next week, barring any heavy thunderstorms. Surface temperatures are starting out in the early morning hours around 82 degrees but warming to the 84- to 86-degree range by midday. Water color is clear. The catfish bite is dependent on the flow of water during summer months. The current giveth and it taketh away. Decent stringers have been reported when current is present as it stimulates movement throughout the food chain. Moving water distributes plankton and that, in turn, stimulates activity from shad schools. And, if the shad are moving, so are the catfish. Some mornings, anglers who rise early attempting to beat the heat are discovering tough fishing as the current doesn’t start moving much until mid-morning, depending on the TVA’s generation schedule. It’s pretty much hit and miss as to when current kicks in, but most days there will be current present as the demand for hydro power is high during hot weather. Still producing have been nightcrawlers and chicken livers plus some commercial stink baits. A few anglers have managed to locate catalpa worms and that bait has always been a good choice. Productive depth ranges have been the 35- to 45-foot area, but some fish have been taken even deeper along the deep sides of the river channel. There have been a few pontoons and fishing boats using jugs and drifting the spread of multiple bait presentations over flats and some backwater areas at times scoring enough fish to keep the interest level up.

Summer crappie patterns are producing a few fish, too, as some cloudy mornings have worked in favor of anglers vertical fishing manmade fish attractors in the midrange depths of 12-15 feet. A few fish were taken in 10- to 12-foot areas in the early morning but falling back to deeper water once the bright sun entered the picture. Crappie are light sensitive, especially with the clear water conditions now present. They often fall back to some deeper water during midday but cloud cover can work in favor of fishermen this time of year. Seems the fish are less finicky when a light chop on the water coincides with cloud cover. Live minnows are paying dividends as are jigs tipped with minnows. Some boats have been seen still trolling crankbaits over main lake ledges and managing to pick up an assortment of crappie and catfish, plus white bass and an occasional sauger from the 15-foot depth range. Tying into a hefty largemouth bass isn’t unusual either. Bass activity is seeing a few more fish transition toward summer haunts such as main lake ledges, humps and deeper brushpiles located on flats in 12- to 15-foot depths. Most anglers are choosing to rotate between big deep diving crankbaits, large Texas rigged worms and jig and craw combos. Some are opting to also add a swim bait and large spoon to their summer arsenal. Finding balls of baitfish along main river channel banks, submerged tributary creek channels or just main lake dropoffs has been a key. Without the baitfish activity, the bass don’t seem to be there. Locating any schools of shad where white bass activity is present is a good sign as largemouth and smallmouth have been following the schools of shad, as are the white bass. Still producing when schools of pin minnows are present have been some shallow areas such as blowdowns where minnow are relating to the deeper ends of treetops. Any exposed structure such as boat houses, piers and crappie beds are holding minnows, too. Spinnerbaits, Texas rigged worms and shallow running crankbaits have worked well in the shallow areas. Despite the hot weather and rising surface temperatures there’s always a shallow pattern available somewhere along Kentucky Lake’s bays and backwater areas if the baitfish are there. Night fishing will continue to appeal to some summer bass anglers as things heat up in late July and August.