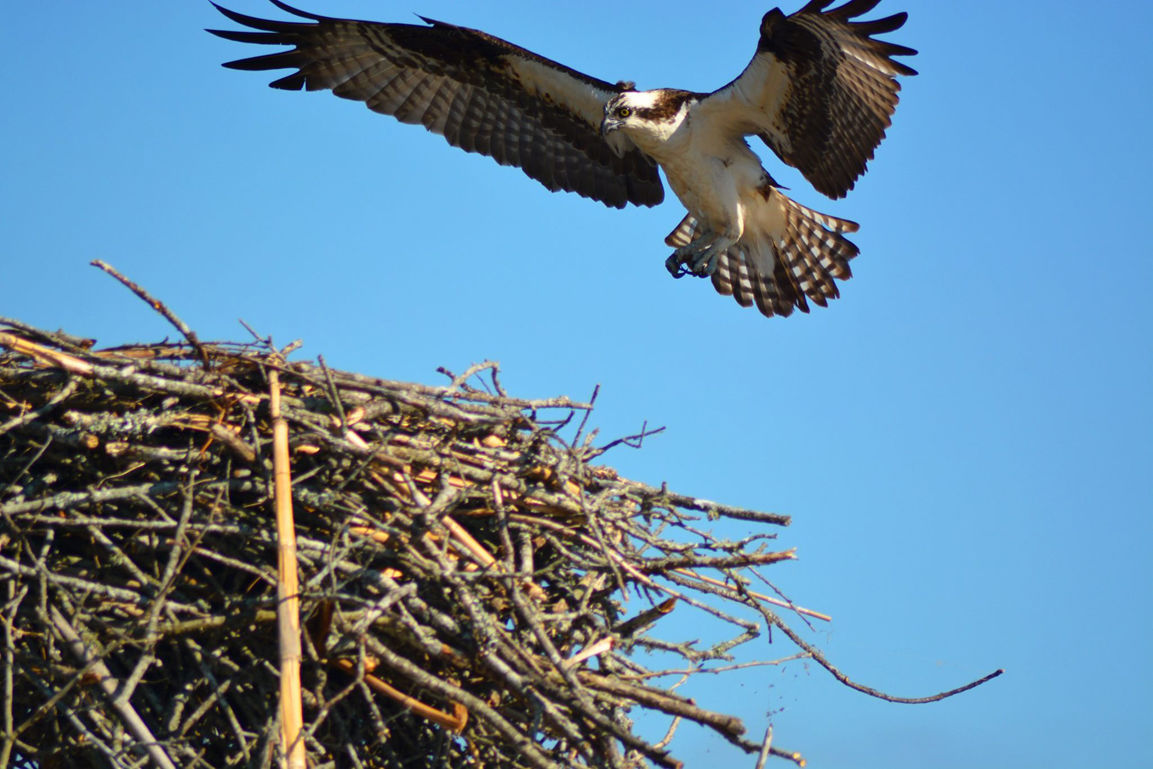 Osprey nests have been abundant across Kentucky Lake this spring. This mother carefully monitors her nest over Eagle Creek as young were about to take their first flight this week. Osprey numbers have increased dramatically over the last few years. The birds, which are commonly known as “fish hawks,” really put on aerial dynamic displays at times.

Osprey nests have been abundant across Kentucky Lake this spring. This mother carefully monitors her nest over Eagle Creek as young were about to take their first flight this week. Osprey numbers have increased dramatically over the last few years. The birds, which are commonly known as “fish hawks,” really put on aerial dynamic displays at times.

Summer’s official arrival last Saturday lived up to the season’s Southern reputation, as hot and humid weather was here in full force.

Temperatures climbed into the low 90s with a big dose of humidity that paved the way for thunderstorms that blew in last weekend.

Anglers had to dodge some dark clouds and rain a few days this week. Most any summer outing comes with a chance of afternoon and evening thunderstorms.

That’s the norm this time of year, as echoed by all weather forecasters who, although broadcasting from their crystal balls indoors, pretend to tell you what it will be like in the outdoors!

Lake levels have risen slightly this week on Kentucky Lake and are forecast to be 359.2 feet above sea level as the weekend approaches.

At midweek, the reservoir crested at 359.4. That elevation is up a few inches from last week at this time, when elevation at Kentucky Dam was showing 358.8.

Surface temps are starting the morning off in the 81-degree range and rising to 84 by mid-day. Water color remains clear across the reservoir.

A few scattered mayfly hatches continue to show up across the reservoir, especially in the aftermath of thunderstorms, which seem to trigger the arrival of this short-lived, natural phenomenon.

Catfishermen are still scoring decent stringers, and most are moving out toward main channel areas. Some success has come from bank fishermen, too, who are still finding some along rocky banks, but near deeper water venues.

A few boats and pontoons have been seem working the edge of the main river channel at times.

And, some are also single-pole fishing while observing the drift of jugs and blocks that offer single-bait presentations that drift with the wind across the lake’s mudflats and vast open water areas.

Nightcrawlers have been the bait of choice for most. while others are using big minnows and cut-up bluegill and Asian Carp for bait.

Bass fishermen are stalking the main lake ledges and humps searching for the big bite. A few decent catches have been made out there too, especially when current stimulates movement of baitfish.

That triggers the bite for ledge fishermen, who much prefer some moving water.

Most main lake areas that are producing have been ones where some structure is present, such as submerged brushpiles or perhaps a few scarce natural stumps on drop-offs.

Depths of 12-15 feet have accounted for some bites. As summer matures, even deeper zones will begin to produce, as well.

The shallow bite for bass anglers has improved a bit, since schools of pin minnows are showing up even more around visible weeds and blow-downs.

Island rims and main shoreline banks where blow-downs are protruding into deeper water have produced and should continue for several more weeks.

Some top-water action has been productive in the early morning and late-afternoon hours. After that, most anglers are turning to a Texas-rigged worm and craw or tossing a spinnerbait or floating fluke-style worm.

Also producing have been steep banks or weeds where both schools of pin minnows are mixed in with mayfly hatches. That combination is luring a lot of bass, as it offers abundant forage.

The bushes and weeds or big tree laps holding schools of pin minnows will likely be holding bass, as well.

Crappie anglers are still working main lake areas in search of scattered fish. Depths of 12-16 feet have been holding a few fish, with some reports of fish now residing in 20 feet water when deep structure can be located.

The mid-range depths are traditionally productive during June, but have been reluctant to yield big numbers lately. There have been some fish there, but anglers are having to make a lot of stops to accumulate a good box of fish.

Some fishermen are trolling crankbaits over main lake ledges and finding some fish there. Depths of 11-13 feet have produced for boats that cover a lot of water with this technique.

Bandit crankbaits in the shad to chartreuse/blue color combo have been popular choices.

Anglers vertical-fishing live minnows or jigs tipped with minnows were still finding enough fish to keep it interesting. The fish have been finicky as to their bite. Clear water may be a factor in that behavior, especially when cloudy days are not present.

Vertical presentations of minnows and jigs is usually productive this time of year, as some crappie fall back to deeper sides of drop-offs and occupy structure. Watch for the 20- to 25-foot depths to produce a few fish if not already.

Baitfish are the key, and the crappie will follow them, whether it’s mid-range depths or deep sides of drop-offs where balls of shad will show up on sonar units.

Some bluegill are being taken by anglers still casting worms and crickets around shorelines where mayflies are present. Also worthy of consideration are bridge piers and rip-rap banks or boat houses, too.